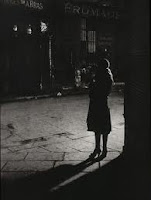 "I don't mind the scars." Those were the first words she said to me after I
had rolled off of her and lit a cigarette.

Her name was Petra. She was originally from Russia and her accent was still
there, though you could tell she had tried to get rid of it in the worst
way.

I propped myself up, slid the back of my hand down her spine. Ridges of
roughness mingled with silky smoothness.

"How'd you get them?" I asked her in a low voice, as if they could hear my
every word.

"What kind of men would do that to an angel like you?" I admit that I was
coming on a bit thick. Petra was a whore, pure and simple, and definitely no
angel, as she'd just gotten done proving in spades.

"Men like you, maybe," she said, a smile twitching and then breaking wide
open. Her teeth were some of the whitest I'd ever seen. I really wish she had
just kept her mouth shut.

"Men like me, huh?" I asked and smoked my cigarette. "What's that s'posed
to mean?"

Petra didn't answered and instead got up and went into the bathroom. I
could hear her peeing in there and then the flush of the toilet. She came out a
minute later, had on a black robe.

She slid her thumb against her forefinger, the international language for
money.

We'd worked an arrangement out. I "visited" Tuesday and Friday and
sometimes I gave her money and sometimes I gave her a break. See, I could easily
haul her in for prostitution if that's what my heart decided on doing. But
Petra's such a nice girl, such a nice lay, really, no two ways about it, that I
give her whatever my heart feels like giving her.

"What about the three hundred I gave you last week?" I asked, putting the
cigarette out in the ashtray on the bed stand. I hastily lit another one.
Chain-smoking. Nasty fucking habit.

She nodded and smiled again. I wish she hadn't done that.

I can't recall what I did first. But I do know that, at some point, the
cigarette got put out and I know that I found a used condom and some extremely
white teeth in my jacket pocket the next morning.

I also remember reading a couple days later about a whore named Petra being
beaten into a coma by an unknown assailant and how there had been no
fingerprints left at the scene. The story also mentioned an ashtray full of
cigarette butts that the police were testing for DNA.

"Knew I forgot something."

Great story! Thompson would be proud.

It's that pocket full of white teeth that seals the deal. Great story.

You know you're going to have write more... What's he going to do next? Helluva set-up, knock-out writing.

Cracking story and I agree, a pocket full of white teeth is a terrific line. Great story CG; my hat is doffed to you.

Yuck! But in the best possible way. I can really see the teeth and used condom sharing space in his pocket.

Brilliant opening line that draws you into a multi-layered story. It is hard to do achieve layering with flash and you achieve it admirably Christopher, this is tight crime writing at its best as you would expect from the man at ATON.

A great title and a great story. I agree with Chris R., Thompson would be proud.
Terrific job, Christopher!

"Wish she hadn't said that." you read that and you just know nothing good's gonna come on from here out. I had a line from an old, old song in my head after that. "When, at last, the police came by, her gruesome deeds she could not deny. For to do so she would have had to lie. And lying she knew was a sin, a sin, lying she knew was a sin." Too bad for the Russian she didn't know it was a sin, a mortal one at that. That's Grant. Christopher Grant. Cool

THAT was fun. Tight, terse, not a word wasted. A glimpse into the mind of depravity, calm, cool, and collected, and bat shit crazy. I've missed ya, Lou...