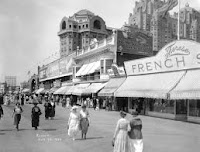 “Coming out with us tonight, Pearl?’ Sam asked hesitantly, poking his head inside her trailer.

He caught just a glimpse of her in the faint moonlight before the gauzy curtains blew inward, obscuring her. The candle on her dressing table shivered, but she cupped it in time. Her hand looked unusually white, but then he realized she was wearing gloves.

How long had it been since he’d seen her without special makeup, long-sleeved blouses, covered legs, and large veiled hats. He blamed himself for what happened last week. It’d been he who found Ray in Miami and brought them together. Ray wasn’t like the others; he had a hair-trigger temper and acted on it. But Pearl liked his volatility, insisting it complimented her more docile manner.

“I don’t have the heart for goin’ out tonight, Sammy. But tell the gang to have one on me.” She reached for her handbag, but he waved it away.

“Come out with us for a little while. Raise the glass.”

Her gloved hand rose and fell in a mock cheer.

“Let me see that mitt,” he said, his voice shaking. “Let me see all of you for once.”

“It’s just between Ray and me.”

“You shouldn’t be defending him.” Bile rose in his throat.

“We had a lotta good years. A few bad times can’t change that.” She looked around for signs of it, reminders of Ray, but someone—Sam, perhaps—had cleared all his things away.

“Showing me what he did might help. When did we ever keep the bad stuff from each other?”

“Not foolin’ me. You ain't been out in the sunlight in years, Pearlie.”

She laughed, lighting her gas lamp. “Some people say too much sun ain’t so good for you. All those bathing beauties letting their faces burn.” She shook her head. “I’ve never liked the sun.”

“You’ll always be beautiful to me.”

She reached out to pat his cheek, but the distance was too great. An imaginary line separated them—a line that kept her in the shadows.

They listened as their friends began to assemble outside her door. “Are you two comin?’” someone yelled.

“I don’t really mind the scars. They’re my war wounds.”

Sam stepped outside and closed the door behind him, and it was only then that she raised the light on her lamp and stripped down to her naked fifty-year old body, still as slim as on her eighteenth birthday. But there the resemblance ended in a frightening show of ruined flesh.

Ray, and the ones that came before him, had made a mess of her all right. The older scars resembled tattoos. Raised tattoos where flesh had been sewn back together inexpertly: sometimes by her own hand, sometimes by a nearby surgeon. Once, when there was no one else, by poor Sam. But never like this. She was raw meat.

Ray had gone crazy in Iowa City last week. It wasn’t really his fault—this time. She’d slipped on the mud brought on by a week’s worth of rain and fallen on top of him in the ring. In a rage, he almost ripped off her leg, lacerated her in a dozen places, nearly tore her left eyelid off.

He’d been shot on the spot. A man in a straw hat stood up in the bleachers, let out a roar to rival Ray’s, and fired the gun. She’d hear the screech of that bullet from some faraway place where the pain had taken her. Their ten years together came to an end in an instant as Ray slumped to the muddy earth. The crowd cheered, then booed, and then a low keening began. It was her as she looked at her cat. The last tiger she’d ever have. The last cat that would share her trailer, the ring, her life.

The one possession of Ray’s she's salvaged was his pearl-studded collar, which she put around her waist. Reaching out, she flung the gas lamp over and threw the candle into the now still curtains. In seconds, fire rushed across the small room.

She didn’t mind it when the fire began to nip at her. Ray had prepared her well.

I never saw that coming. What a twist. Excellent story.

Nicely turned. Convincing evocation of the time and place in the details woven around the conversation.

Fantastic--a very memorable character. I like the Iowa City reference too!

Very nicely done, you had me the whole way and the twist was clever. Great!

Great story! Lovely ending. And thanks for putting this whole thing together, Patti.

Geez, what a scorcher... surprising twist ending (you blindsided me, there!) and truly moving as well. Excellent, excellent work.

You did so much in a small space. A lovely relationship between Pearl and Sam,a very evocative sense of the period, and then the end. Wow!

Thanks so much and right back at you.

Stylish writing, a super twist that blind-sided me and a powerful last line. Cracking story, Patti.

Had me with the tiger. Very cool. Beautifully written.

The lady and the tiger...and a study Kate pointed me to last week noted that women are more often manipulated by their pet felines than are men (I suspect they didn't take into account enough Roys along with their Pearls).

As you note elsewhere, your years with the circus show (hey, I bought it, and I bet O'Nan and Gruen would, too).

Magnificent! And the twist of the year!!

I wonder if the movie will be good at all. Robert Pattison has yet to enchant me.
Thanks, Paul. From a master, that means a lot.

My gawd Patti. Didn't know you had it in you. I loved your beginning. Absolutely electrifying.

Oh my, what a wonderful story, Patti!!

Woof. Not just a twist, but a twist that grows on you instead of smacking you over the head. Living proof there is time for subtlety in flash fiction.

Thanks so much for all the kind comments re: my story and the challenge in general. You guys are the best.

It wasn't the scars, it was the internal wound she couldn't overcome. What a good story, I didn't see the tiger until he'd already hurt her.

Thanks so much all.