"And I Wasted My Flash Fiction Challenge on Scars" 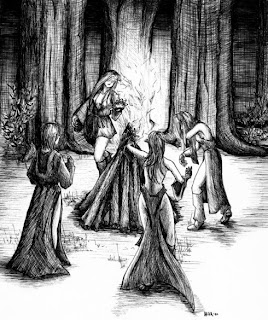 A month after Romanian authorities began taxing them for their trade, the country's soothsayers and fortune tellers are cursing a new bill that threatens fines or even prison if their predictions don't come true.

Witches argue they shouldn't be blamed for the failure of their tools.

"They can't condemn witches, they should condemn the cards," Queen witch Bratara Buzea told The Associated Press by telephone.

Superstition is a serious matter in the land of Dracula, and officials have turned to witches to help the recession-hit country collect more money and crack down on tax evasion.

In January, officials changed labor laws to officially recognize the centuries-old practice as a taxable profession, prompting angry witches to dump poisonous mandrake into the Danube in an attempt to put a hex on the government.

The new draft bill passed in the Senate last week. It still must be approved by a financial and labor committee and by Romania's Chamber of Deputies, the other house of Romania's parliament.

Bratara called the proposed bill overblown. "I will fight until my last breath for this not to be passed," she said.

Sometimes, she argued, people don't provide their real identities, dates of birth or other personal details, which could skew a seer's predictions.

"What about when the client gives false details about themselves? We can't be blamed for that," she said.

The bill would also require witches to have a permit, to provide their customers with receipts and bar them from practicing near schools and churches.
Posted by pattinase (abbott) at 8:30 PM

Romanian witches with scars? hmmm. Might make an interesting story.