It's All in the Details

How much detail in a novel is too much? Specifically how much are you willing to learn about—let’s say—running a hardware store. What if the information about screws and drills and rakes is pertinent to the story or creates the atmosphere that makes the story go?

I am wrestling with this now. In short stories, it was pretty easy—just a sentence or two was all I had space for. But now I can tell you lots and lots about hardware stores. I studied up on them and there is a case for putting a lot of this in the novel. It will reek of wood and metal and fertilizer if I do. And jeez, I did spend months learning about how they do the inventory and what kind of things customers say when they come into the store.

I know it depends on how interesting it is and how it adds to the story but do you usually want to get back to the action? Do you usually think, “All right already with how bolts work? Give me a murder about now.

Save me from drowning in my details before it’s too late. See, even here there is too much detail.
Posted by pattinase (abbott) at 3:53 PM 6 comments:

How Far Are You Willing to Go

in rewriting a story for an editor? Lately, editors seem to be getting more proactive in what they want stories in their mags/zines to be like. Maybe this is a good thing and it's probably likely that I write too lit-light, not dark enough for some of the places I submit to. I still haven't given up on the idea that a story can end without a big bloody death. But in that case, I should probably go back to the lit mags, I guess.
Do you change your stories to suit an editor? How many times will you go back to the drafting board to please someone? If the editor makes his/her case, I usually will go along with it. I'm not sure or secure enough to be wedded to a particular ending. How about you?

I did have stories accepted recently in fall/winter editions of Spinetingler and Demolition. A nice treat!

Recommended Movies: Waitress & Away From Her.
Posted by pattinase (abbott) at 8:18 AM 9 comments:

She's in the Army Now

A short piece on Muzzle Flash (D.Z. Allen) brought about by a news story I heard on NPR. It may be too political and angry to function well as a story. Do you ever find that? The pieces you care most about are not often your strongest pieces?

http://www.muzzleflashfiction.net/
Posted by pattinase (abbott) at 8:10 AM 2 comments: 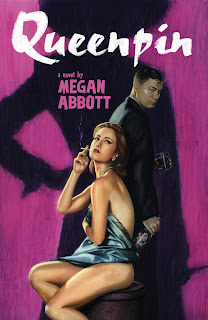 Megan's third book Queenpin is out now and a PBO to make it more affordable. If The Song is You was about a man who tried to reform, Queenpin is about a woman who doesn't know the meaning of the word. It's a racecar of a novel and I highly recommend it.
I'm lucky enough to have some of Megan's earlier efforts (ages five and on) and she was writing (and illustrating) noir even then. Maybe I can scan them on here sometime.

I'd also like to recommend a collection of short stories by my good friend, Dorene O'Brien. They may masquerade as literary fiction but they are about as dark as any noir. Voices of the Lost and Found is published by Wayne State University Press, their first fiction. It's a real treat.
Posted by pattinase (abbott) at 9:08 AM No comments:

Some Personal Observations about Travel

I took the four books recommended from the nice people on crimespace. Excellent, life changing books that would hold my interest. Instead, I read a romance novel (Marrying the Mistress)by someone called Joanna Trollope I found on the shelf where we stayed. If she is Anthony's relative, she has some 'splaining to do. It was quite bad but easy to follow, requiring no focus or commitment. You could open it on any page and be right at the same spot. Apparently she has never heard of the Page 69 rule or else applies it on every page.

Budapest seems to be still in the thralls of Soviet bureaucracy. Buying a train ticket required two stamps from two officials and took twenty minutes. We paid huge fines on the metro system because we changed lines without buying a new ticket. A virtual army of citizens stood guard and pointed firmly to the sign that warned us that ignorance or misunderstanding of the law did not constitute an excuse. In free museums, we stood in line to get a ticket that said we could enter for free and then stood in another line to pass this ticket on. In one museum only the dome required a fee and that was guarded by two women more ferocious than any in a noir novel.

I am being evil here though because Budapest was just lovely: the people, the food, the sites.

In Vienna, our parsimony undid us as we discovered out flight on Ryan Air was actually in Bratislava, an hour away. It was Sunday and early so we had to pay a female taxi driver to drive us there. She spoke no English but talked the whole time. It turned out she had no idea where the airport was and spoke no Slavakian. We made it, of course and paid her the equvalant of $120. She tapped her inch long red nails on the window and sped away crying out...something.

In England, I fell down the stairs at Lilly Whites and was nearly rushed to hospital. Later on the bus a woman next to me spend forty-five minutes applying makeup. I doubt I have spent that time in my life. She also sniffed something called Oil of Alba. I got quite jolly by the end of the ride.

I bought my six month old grandson a football uniform but understand I picked a bum team. I couldn't resist the fetching colors.

Jetlag is setting in now but glad to be home. Forgive me for any errors here. I am truly loggy.
Posted by pattinase (abbott) at 10:12 AM 9 comments:

If anyone wants me

I'll be in Budapest, Vienna and London. I'm still trying to pick my four slim paperbacks to take and figure out how to get everything into a carryon bag. It's not clothes that I'm worried about-it's money belts, umbrellas, guidebooks, prescription drugs and microfiber towels.
Take care. I'll miss all of you (or at least the three of you I hear from).
Posted by pattinase (abbott) at 4:58 PM 9 comments:

The Trouble With Trolls

My new story "The Trouble with Trolls" is in Issue 15 at Thuglit-link on the right.
Posted by pattinase (abbott) at 8:14 AM 3 comments:

The Son-in-Law Weighs In

Basically he likes it. Thinks the premise works, the characters work, the atmosphere works.

On the more alarming side, he doesn't see her as being dark, doesn't think she would murder anyone, sees the novel as a self-discovery narrative rather than suspense-- much less noir.

I thought I had long buried that self-discovery crap but here it is raising its ugly head. I don't think I can pitch a book that's not genre. So do I begin to change it now or write till the end and hope it works out. Or write to the end and then change things.

I knew this babe was running off with my book by the third chapter. I knew she wasn't gonna let me take charge. What would you do?
Posted by pattinase (abbott) at 12:10 PM 7 comments: