"How I Came To Write This Book: Eric Beetner and JB Kohl 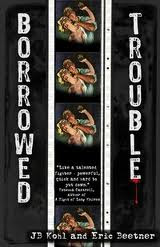 Eric here, sharing my take on how I came to (co)write this book:

To do it once was crazy enough. Write a book with someone you’ve never met and never spoken to? An entire novel – over 75,000 words – later we had a book we liked and publisher willing to put it out. How did that happen?

That book, One Too Many Blows To The Head was met with high praise and more goodwill than we expected, but beyond that it was so much fun to write. We haven’t sold a million of them, not by a long shot, but sales had nothing to do with our decision to write another. We enjoyed working together, Jennifer and I. Even before the first book was done we talked of doing it again.

Neither of us had been collaborators before. The few times I had done it on screenplays I didn’t care for it all that much. It helped that the way our story was structured our characters stayed apart for most of the action. It really is like reading two books in one. For the sequel, Borrowed Trouble, the former enemies are now working together. Things got complicated. The outlining process went on much longer. Things changed as we were writing. Scenes were excised, locations changed, the timeline adjusted to compensate for one character being in one place and needing to intersect with another. It became more of a puzzle than One Too Many Blows To The Head, but no less enjoyable.

We adjusted and tweaked right up to the wire. After proofs had been sent out for blurbs I axed an entire chapter of Jen’s work. I felt bad doing it but I found a logic problem I couldn’t overcome. She took it valiantly and rewrote what I think is a superior scene. The blurbs we got on the old version still seemed to like it. Kelli Stanley (City of Dragons) said, “For a knockout punch of hardboiled, look no further than Borrowed Trouble.”

Hilary Davidson (The Damage Done) said, “Everyone has a short list of books that stayed with them long after they turned the last page—add Borrowed Trouble to mine. This is pulp fiction at its finest.”

Rebecca Cantrell (A Night of Long Knives) said, “Borrowed Trouble is like a talented fighter – powerful, quick, and hard to put down.”

So with the publication of Borrowed Trouble Jennifer and I still have no plans to meet. We’ve gotten quite superstitious about it. Oh, we know everything about each other. Kids, family illnesses, life changes – she was right along for the adoption of our second daughter, I was right there when her eldest son went off to college.

We’re at work in the very early stages of a new project. We both write our own solo work as well, so as we each finish a book on our own we exchange emails about little plot points and ideas for our next collaboration. No matter what, we will write together again. It’s too easy, too fun.

It shouldn’t work. I know that. But it does. Best not to question it.

Eric and JB are the authors of ONE TOO MANY BLOWS TO THE HEAD and BORROWED TROUBLE.

I have also tried writing a book with a Danish woman I have never met. Sadly, she gave up halfway (other commitments), because I saw our experiment as a great way to learn valuable lessons about killing your darlings and seeing things through other people´s eyes.

Patti - Thanks for hosting Eric and JB.

Eric and JB - I'm so impressed with the way that you collaborated "from afar." I've done some non-fiction collaborating but that was with a work colleague. We were able to meet with each other, etc.. I give you much credit, and I wish you much success.

Based on my husband's experiences with collaboration, I would never attempt it.
My goodness, Margot, you get up early,