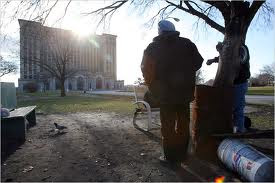 Charlie Stella is offering a reading service you can find more about here. I took immediate advantage of it.

I've had this book, RAISING THE DEAD, knocking around for three years. Clair Dickson read it and offered some great suggestions. So did James Reasoner and Elaine Ash. And I thank them all immensely. Also my writing group and especially Anca Vlasopolos, who immediately told me this was not a crime novel--but I didn't listen.


It took me until now, after I took advantage of Charlie's new service, to finally realize once and for all that it is not a crime story. It's dark all right but what isn't dark in Detroit.

Charlie found all the typos and unclear sentence--the usual stuff--but he also wrote a three-page single spaced analysis of what it was and what is wasn't. What worked for him and what didn't. This was amazingly helpful. It is now in the first person POV, which makes a quirky woman less irritating. I get inside her head more and I eliminated some of the clues, which said, "Well I am trying, but not so successfully, to write a crime novel."

He pointed out to be that he was nearly halfway through before it even occurred to him that it might be a crime novel.

I am now ready to re-pitch it as a straight novel. Period. I will not seek out agents who specialize in crime. They will only be disappointed.

Charlie didn't like the title RAISING THE DEAD, which I had used for it as a short story. Other people have said the same thing. If anyone else can come up with a better title that uses the word Detroit in it, I'd love to hear it. It's about a woman photographing the dead of Detroit.

Does THE DEAD IN DETROIT work for you? I just don't know. That still sounds too much like a crime story. Someone already used DETROIT NOIR. See how easily I drift back to packaging it incorrectly.

But do take advantage of Charlie's new reading service if you need some help. You won't regret it.
Posted by pattinase (abbott) at 2:51 PM

Charlie was kind enough to read a draft of a novel for me before he turned pro. His comments were insightful and helpful, and he's gresat to work with. Highly recommended.

Hmm... from the short story, I thought the most interesting aspect was how the narrator changed. My inclination is to go with a title that focuses on that angle, but I don't know exactly how to express it in a couple of words.

Thanks for the plug, Patti. Just watched an incredibly disturbing/moving French Film (heartbreaking and all the rest) ... Mademoiselle Chambon (so excuse the French bit below--it's also to annoy my good friend, Doc).

God, I saw that at the theater. It was like Brief Encounters. So sad. His eyes haunt me still.

I already warned my wife that she can't see it (she's still pissed at me for Revolutionary Road).

Yeah, it's been an hour and it still bothers me and from so many different directions.

It's obvious: SHOOTING THE DEAD

ABBOTT-'TROIT, of course, since I'm always willing to go for the Franglais. (Pronounce the city's name fragment as it was meant to be, of course.)

Why do you need the city name in the title? I'm not sure that actually helps.

Is she a pro, or is it a passion of hers, or both?

MICHIGAN MORI is too cute.

wv: smaxi, which should be a word.

Ron's is good. DEAD SHOT (or DEAD SHOT IN DETROIT) certainly might fly, too.

Shooting the Dead is good, but would you feel cheated if it turned out to be about a photographer instead of a hitman.

I know there was an old Lana Turner film with this title, but titles aren't copyrightable: PORTRAIT IN BLACK.

Some good ideas there. I like MOTOR CITY DEAD but think it's been used, probably by Estleman. I think you have to be careful of leading the reader to believe it is a crime novel, so you may have to add a clarifying subtitle.

How about CAPTURING THE DEAD OF DETROIT, a novel about a photographer and her journey? Or something along those lines. That way you have a title that's almost as long as the book, but you still have to be careful the reader doesn't assume it to be a zombie novel.

Well, maybe if there's a big payoff they might.

I like SHOOTING THE DEAD, Patti. Nice one, Ron.

Jerry, the Estleman title you're thinking of was MOTOR CITY BLUE, not DEAD.

Patti, meant to say I finally started DAMN NEAR DEAD 2 today and I liked your story. Very suspenseful. See, there's a lot to be said for being at the beginning of the alphabet!

Charlie is a great editor and a straight shooter. He did the same thing for me with my last novel. It's amazing how much those little notes in Track Changes help, and how powerful the right comment at the right time can be.

Oh, thanks, Jeff. That is so nice to hear. Especially from someone as well read as you are.
Charlie is certainly aces with me.

Yeah, I was looking through a list of photographic terms, Sandra, and a lot of them are intriguing.

I think it is better to play on the double meaning of the word shot. It grabs a person attention.

Here are a couple of suggestions:
Morgue Shots
Shot in Detroit

I'm groping toward something analogous to W.C. Fields's supposed epitaph: "On the whole, I'd rather be in Philadelphia."

SHOT IN DETROIT seems about perfect
although SHOOTING THE DEAD is more poetic.