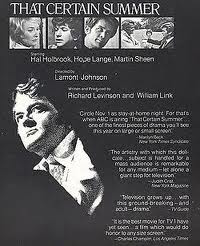 Back in the sixties and seventies, the networks turned out some pretty good TV movies and mini series. I just read the list and of TV movies from the seventies and I had forgotten some of the movies on there were even made just for TV. In many ways, they eclipse the movies HBO has turned out since and certainly a lot of feature films. I could have chosen many, but I chose THAT CERTAIN SUMMER (ABC, 1972) because it was the first TV movie to deal with homosexuality and it did so with elegance and a first-rate cast.

Hal Holbrook plays a father who has left his wife and son to live with his lover, Martin Sheen, in California. His son (Scott Jacoby) has no knowledge of his father's sexual preference until a summer visit. Martin Sheen plays the lover, Hope Lange, the wife. Now a lot of the movie concerns locating the missing son (who runs off on learning the news) but it also examines their relationship in a thoughtful, respectful way.

The movie was directed by Lamont Johnson, the script written by Richard Levinson and William Link.

Take a look at the list of made for TV movies from the seventies and marvel. Now we just have LIFETIME movies. Not that there's anything wrong with that.

For a list of all forgotten movies this week, please see Todd Mason's blog.
Posted by pattinase (abbott) at 8:15 AM

Oh, we always had Lifetime movies, only they had Even Better titles such as MOTHER MAY I SLEEP WITH DANGER? and LITTLE LADIES OF THE NIGHT. Exploitation films for television, and pretty twisted stuff, such as the one just-post-BORN INNOCENT which was consistently teased by Ernie Anderson's voiceover on its ABC ad about how a teen girl would be picked up as a hitchhiker and she "became a woman" (illustrated by her biting heavily into an apple, of course). Yep, Levinson and Link's proudest non-crime-drama moment, this film, maybe proudest of any kind...I've yet to see it, unless I saw it when very young and have forgotten, but look forward to it...

I was waiting for your to appear to include the link, which I will do now.

Yes, there IS something wrong with that. We either get the Lifetime "my husband is trying to kill me" movies or the Hallmark Channel sapfests (sorry, but most of them are) or SyFy's sometimes fun monster of the week.

Where is the quality made-for-TV movie of today?

Doesn't exist, for the most part.

Even on the premium channels, there is little attempt to make movies. They do a good job with documentaries (sometimes) but in the area of movies-zilch.

I remember this one. And yes there could be some clunkers back then, but some could be wholly original and well done.

Granted, there was classy stuff like Dawn: Portrait of a Teenage Runaway, which must have been a hit as there was a sequel (Alexander: The Other Side of Dawn).

But there was also:

All were superior TV movies written by Levinson & Link.

Patti - I have to confess I'm always at a loss when it comes to forgotten movies. I've seen my share of films, but am not what you'd call a film buff. Still, I think there have been some good made-for-TV films...

And I almost chose Slovik, Jeff, which I well remember.
It's a vice you may be better off without, Margot.

HBO continues to make excellent movies and consistently wins awards for them. The Temple Grandin bio-pic is the most recent example.

I remember this movie. Pretty potent for a teen as I was then. And I also remmber how when AN EARLY FROST (the first movie to deal with AIDS on TV) was first aired all my theater friends and I watched it like it was a huge event. In retrospect I think it was. But certianly these days there is little on network TV that comes close to having such a personal impact on me anymore.

I'd add to this list three great ones that came during the 70s which starred the late Robert Culp:
- A COLD NIGHT'S DEATH
- HOUSTON, WE'VE GOT A PROBLEM
- OUTRAGE

HBO tends to make movies with a social point to them though. Like the Kevorkian or the one mentioned. I would like some movies that are pure entertainment. Looking forward to the Mildred Pearce mini series.
Have to look for those three. I wonder how many are on DVDs.

With the fragmented TV/cable audience, networks aren't going to take too many risks. THAT CERTAIN SUMMER wouldn't be made today. Unless it was turned into a comedy.

Yegads, Patti. Memories. I saw this once upon a time. All I remember though is that the film impressed me with it's good sense. And I, too, fell in love with Martin Sheen. But then, I'm easy that way.

I wonder if I can find the film somwhere so I can watch it again.
Perhaps, Netflix?

I am generally not a fan of Claire Danes (yes, I know she's talented, blah blah) but I have to agree with John about TEMPLE GRANDIN (and Danes in it). It was excellent.

Just watched DOWNTON ABBEY, all 7 parts, on netflix. High class soap, but not bad. As for the 70s, I remember getting hooked on RICH MAN, POOR MAN (1976).

I remember several TV movies with Elizabeth Montgomery (in her post-"Bewitched" incarnation), including one of the first serious analyses of rape, "A Case of Rape" and one where she was alone in a house on the classic "dark and stormy night" with a killer on the loose. I think that one was called "The Victim"--and I remember it scared the bejesus out of me back in the day. She was also in a TV movie where she played a policewoman and O.J. Simpson was her partner--that made news because they kissed at some point. And let's not forget her portrayal of Lizzie Borden.

I will never forget the Lizzie Borden one. Strangely enough I saw her husband, Robert Foxworth, in a play last week. He's still going strong so many years after her death.

Yes, but for the tastelessness of some of the early tv movies...well, there was IT COULDN'T'VE HAPPENED TO A NICER GUY, all about how hilarious it is for a man to be raped.

RICH MAN, POOR MAN, like ...ABBEY, is a miniseries (or two), though...hair-splitting, perhaps, but somewhat different.

Oh, wow, I'd forgotten about this -- I do remember Hope Lange, Hal Holbrook and Martin Sheen in it. Cool!