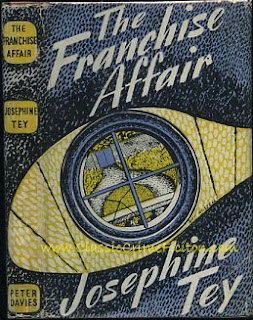 Although I love Tey's DAUGHTER OF TIME, in many ways, I consider this a more compelling read.

There is no murder in Tey's THE FRANCHISE AFFAIR (1948). A young girl (15) accuses two women, Marion Sharpe and her mother, Mrs. Sharpe, of kidnapping her, beating her, and holding her prisoner at their house, the Franchise. The girl gives a spot-on description of the attic in which she was supposedly imprisoned.

A lawyer, named Robert Blair, investigates the charges. He' s convinced that the girl is lying. But how to prove it given her knowledge of the house and women.

The story is based on the real life story of Elizabeth Canning, an eighteenth century girl who made a similar charge.

THE FRANCHISE AFFAIR a wonderful novel. The characters are well-developed, the story is engaging, the writing is lovely. We learn a lot about English country life in the mid- twentieth century. It was made into a movie, and twice televised for TV.

Ed Gorman is the author of STRANGLEHOLD, TICKET TO RIDE and other fine novels and short stories. You can find him here.

A NIGHT FOR SCREAMING, Harry Whit 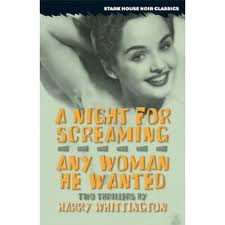 Back in the 1950s you could run but you couldn’t hide from Harry Whittington. Those were the days when many if not most paperbacks were sold in wire racks found in drug stores, grocery stores and what were
then called dime stores.

Harry told me that he’d once seen five books of his displayed on the same rack, all published that month. He worked for everybody, from Gold Medal all the way down to Carnival. He did westerns, nurse romances,
tie-ins, war stories and of course crime novels. The last was his true calling. There there was no sub-genre of suspense/mystery he didn’t like. Or apply himself to.

Harry’s world was not one of ratiocination. There wasn’t time for that. Most of his white working class protagonists were on the run from cosmic forces that would have given Lovecraft pause. In A Night For Screaming, for instance, the villain is so oppressive you seriously begin to wonder if the protagonist will survive. Seriously.

The setting is one of those labor camp where drifters and small-time cons are forced to toil for the local politicians who make money on them. If the characterizations are less subtle than COOL HAND LUKE, the
violence is every bit as painful. There are two scenes that literally made me wince. Harry knew the Deep South all too well and he presents it here in a series of brutal scenes that capture perfectly the steamy sweaty night and the steamy sweaty promise of sex. If you have any fear of cops, the opening scenes
will scare the hell out of you.

Any Woman is a working class nightmare of a different kind. A once crooked cop stumbles on to a situation even he doesn’t want to cover up and joins his former enemy the DA in trying to right it. But the DA dies mysteriously and the cop is forced to go after the mob that runs the town by himself. Although this is a familiar 50s theme (the crooked town), Harry throws in a complication that makes the story personal and harsh. Harry always said that he knew how to do two things – plot and create characters. And this book proves that wasn’t any empty boast.

Here’s the Stark House website: http://www.starkhousepress.com.Publisher Greg Shepard is bringing back the favorites of the 50s including Malcolm Braly, Gil Brewer, Stephen Marlowe, Day Keene, Vin Packer, Doug Sanderson and now Harry Whittington. He needs your support and I feel he deserves it, which is why I’m lending a hand. As I mentioned on my blog the other day, I recently paid $15 for a paperback from ABE. Well, I just got it today.It’s yellowed and the spine cracked when I opened it. Stark House sellstwo-fers (two books per volume) in handsome, sturdy editions for $19.95 that will last much longer than most pbs. I have no financial stake in this. I merely want to see the line thrive. Check out the website.

My entry this week is CRUEL CUTS by J. R. Lindermuth. Went up on my blog
http://kevintipplescorner.blogspot.com/ awhile ago.

Another great series of entries.

Just posted my forgotten book for this week. It's The Executioners by John D MacDonald

I have only read one Tey: DAUGHTER OF TIME, and thought it good but not the great novel so many do. A matter of taste, obviously. I had read Catherine Aird's THE RELIGIOUS BODY just before, and it suffered by comparison.

I've posted my entry for this week, Blood On Frisco Bay:

Ahhhhh one of my bestest Friday blog stops!! :-)

Belatedly, I enter the field with, of all things, Beowulf.

Patti: I loved DAUGHTER OF TIME, BRAT FARRAR and A SHILLING FOR CANDLES. I liked THE FRANCHISE AFFAIR.We all have our favorites. Tey was a wonderful writer. :)

Meant to say too, I've posted my Forgotten Fridays entry: HARMONY IN FLESH AND BLACK by Nicholas Kilmer on my blog.

Good for Tey...the tendency to default to murder has often been too great, even when she was most active.

Stark House does need more of my money, I suspect...the heirs, and Ms. Meaker herself, probably won't mind, either...

Many fine choices this week and gotta love that title, THE FRANCHISE AFFAIR.

So happy to see Ed Gorman's review of the Harry Whittington two-fer from Stark House. It was the first Whittington I read and set me off searching for more by him. I've heard they called Whittington the "King of the Paperbacks", because wrote well over 200 books in something like a ten or twelve year period... which is nuts. But the guy was great.