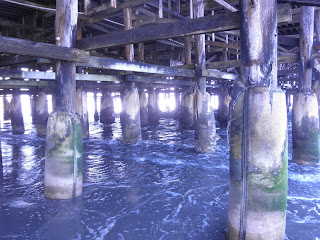 I am at sea in more ways than one.

While I am out here in CA, I have been working on putting my second attempt at a novel all in the first person. I had it from two POVs, a mother and a daughter. But it lacked immediacy so I decided it should all be from the kid's POV. Although things happened when the kid wasn't around, her mother told her about them or she heard about them so it was pretty easy to get them into her POV until page 230 or so.

In the last third of the book, there is an estrangement between the two and I cannot figure out the best way to handle the mother's story. Does anyone know of someone who handled such a thing well or have an idea. Or should I just have two POVs for the last third without making a fuss about it? Would it bother you. It would be a chapter thing mostly. I am flummoxed.
Posted by pattinase (abbott) at 3:07 PM

Switching between two (or more) POVs is becoming more common. Usually you feature one character's POV then start another chapter to switch POVs.

But it is a device that probably should be used for the entire book not just a section...unless you use it to illustrate the characters separation.

Patti, Ace Atkins switches POVs in his great novel WHITE SHADOW. Some of it is first person, but most is not, but he does it very skillfully throughout the book.

What you could do is weave in a few third person chapters in the first 230 pages to establish the fluctuating POV, then by the time you get to the critical point where you really need third person, it's not a major trauma for the reader.

I personally don't mind alternating POV's at all, although I think most people either use all 3rd for this OR do what Michael Connelly did in "The Reversal" where Harry Bosch's chapters were in 3rd and Mickey Haller's were in 1st. Would that work for you in this case?

I was going to suggest what Mike did--a few brief chapters in the mother's POV to prepare the reader. Good luck with the book, Patti.
You've picked a great time to be in California. We're waiting for our third ice storm in two weeks.

I'm with Mike in that I don't mind 2 POV's in a story and it should most times be done for the whole novel. You could always have another character come into play who could divulge this through conversation with the mother, maybe a friend or a therepist or something like that, withou tmaking it look like a data dump

Version One had a first person POV and a third person for the mother.
Version Two was all in third and didn't work. I needed the reader to see it from the daugher's POV.
And things were going well until now. So I am going to have to figure it out.

Changing the POV in alternating chapters is very reader-friendly. And it might spur some creative juice.

as long as it's in separate chapters and there's a clear indication in the first sentence as to whose head we're in, I would be all right with it.

Even if the mother's voice didn't come in until 2/3 through?
I think I may need to explain that somehow.
Because in a way, it describes what has happened. That the relationship has severed and she can no longer trust her daughter to tell her story. Sorry if I am working it out here.

Is changing POV 2/3 of the way through too postmodern? For me, the unexpected shift would reflect the impact of the estrangement.

Thanks, Ron. I hope it works.

Multiple POVs are acceptable to me, but I prefer a single one, I think it adds cohesiveness and flow.

Have you thought about having the daughter have a friend (introduced earlier) who thinks she can help by "getting them back together" and talks to your character about what's going on? Teens very often convince themselves they can save the world, or at least their friends...

It's like Mildred Pearce in reverse. You are relieved she has finally seen through her mother and cast her off.

As Michael says, such a switch is no big deal nowadays. My daughter who studies comparative literature right now has assured me it doesn´t matter as long as it is done properly.