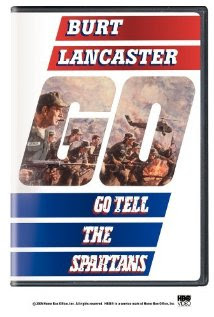 For a complete list of Forgotten Film, check out Todd Mason's blog here.

Few people seem familiar with this 1978 film starring Burt Lancaster and Craig Wasson. It was the first film I remember seeing about the war in Vietnam and was directed by Ted Post, based on a book by Daniel Ford .

Lancaster is an army major and sent to Vietnam with a small group of advisers. More and more, as time passes, he begins to see the mission as hopeless and in fact, resembling the fate of the French there ten years earlier. The locals are enigmatic and he can't control their actions. The Viet Kong are even more troublesome.

This is a quiet movie. Made just a few years after the war ended, it simmers with frustration and angst. I think it is one of the best movies about that war or any war because it points out its folly from the getgo. There were many fine movies made about the war in Vietnam but this is my favorite.
Posted by pattinase (abbott) at 6:00 AM

Patti - Oh, thanks for sharing this. I have to admit, this one went right past my "radar." I should go look it up and try to rent it...

I saw it years ago and agree that it's a fine piece of work.

Excellent selection, patti! I never saw it in the theater, but rented this one on VHS (remember those?). The title was a fitting one, too (from the epitaph for the Spartans who fell at Thermopylae by Simonides). Thanks.

I remember it pretty well from a television viewing sometime around 1980...the title certainly stuck with me, as much as the mood.

Thanks! (and for being one of the few to direct anyone to the balance of the list...)

I really liked this movie too. I should watch it again.

Absolutely! Now I want to see it again real soon. . .

I'll be watching for this sucker.

Have to check him on IMDB. That's usually my best source.