I'll be away on September 18th. Week off perhaps since a bunch of us will be in St. Louis? Or would someone else like to gather links?

REPLAY by Ken Grimwood was written in 1986. It tells the story of man who has a coronary in his late thirties and wakes up t 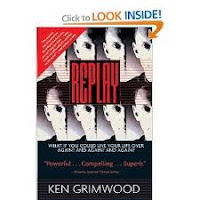 o find himself a high school student again. He quickly comes up with the idea of having an older friend place bets on horse races and football games where he knows the outcome and proceeds through this new life, a hugely wealthy man until it happens again.
And again, and again, with each life taking unexpected turns as he makes new choices.
He meets two other replayers, which allows him to discuss his situation.
This was a real page turner (recommended by Jeff Meyerson). Grimwood manages to insert some complexity into the thinking while keeping the pace up. Highly recommended. I can't help but wonder why this was never a movie. Could have been a terrific one. Or even a TV series. That might be even better.

Ed Gorman is the author of STRANGLEHOLD and TICKET TO RIDE. You can find him here.
I've always liked Marshall Crenshaw's songs especially the heartbroke ones which he manages to write with a light but no less painful touch. I saw him once in person just after his career started to slide. He's an interesting guy and a fine musician. 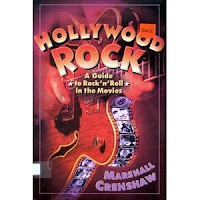 esting guy angle is on display here with this guide to rock'n roll movies.

The Guide goes all the way to 1994. The reviews are sometimes serious demonstrating that besides being a true rocker he's also a perceptive critic. But the most fun for people like me who grew up in the fifties are his reviews of the rock movies of that decade (and on into the sixties).

God were those movies terrible. I lost count of how many had the same basic plot--town/suburb of oldsters hate rock but kids put on a show for charity/fame and convince even the crabbiest oldster in the film what great young `uns they are after all. And those were the ones that were at least about rock `n roll. There were hybrids put together by adults who didn't have a clue. Thus in the same movie you might have Chuck Berry, the Platters and Liberace.

One of these was so bad that Crenshaw calls it "The attempted murder of rock `n roll." This starred Jimmy Clanton as "Teenage Millionaire." The first thing wrong with it Crenshaw notes is that Clanton "looks about twenty-eight." Here you had Jackie Wilson and Dion appearing with Zasu Pitts (talented actress who started in the silents) and that great actor...Rocky Graziano. Crenshaw's summary line for this one: "The producers of this film are probably on the run because there's no statute of limitations on crimes like this."

Inevitably he gets to Elvis movies and has a great time with them. He says that in "Kissin Cousins" "Elvis fights heroically for a nuclear missile site" to be implanted in this lovely bucolic setting (thanks El). There's also a weird sad note for those of us who liked the Fifties western series "Sugarfoot." At the time Will Hutchins appeared in his Elvis movie he was employed by a studio as a bicyle messenger. Edd Byrnes deserved this fate not Will Hutchins.

A dazzling, smart, fond look at the good and bad that has been done to rock `n roll in both American and British films (The Brits were at least as goofy as we were). You can't go wrong with this one.

Patti - Thanks for including my post about Simenon's Maigret and the Yellow Dog :-). That's awfully kind of you!

And nice of you to let me.

I'm glad my recommendation met with your approval, Patti. Since we both like those kinds of time travel books I thought it would suit you. I just got another copy to reread.

I'll have to check out that HOLLYWOOD ROCK book, which I'd never heard of before but which is - obviously - perfect for me. TEENAGE MILLIONAIRE has one of my all-time favorite casts (as listed in the review) and makes you wonder: what kind of drugs were they on back then to think of it? Jimmy Clanton may have looked older, but he was only about 20 or 21 at the time.

It was very, very bad.

I'm troubled by the way Mamet treats his women characters in all of his plays.

Yes, George - good point. You could use HURLYBURLY or SPEED-THE-PLOW as good examples of that too.

Lots of good books this week. Besides the Johnson, I've read the Simenon under the original translated title of A FACE FOR A CLUE.

I bought Gruber's BRASS KNUCKLES at a very reasonable price on ABE and read it in Florida last winter. It was a lot of fun, and as always with Gruber you got a picture of what New York was like 70 years ago.

I've got an idea for a story about a guy who has a coronary in his late 80s and wakes up in the body of another guy in the far future. May right it one of these days.

Love those sorts of stories.

I've added REPLAY to my TBR list. Sounds intriguing. Now I'm off to check the other titles for today.

Mine's up now, Patti. Shadow of Night by August Derleth.

I'd like to read story where not only does the protagonist go back in time to inhabit his younger self but everyone goes back in time too. The only exception are people who died in the interim, they don't know what the hell is going on while everyone does.

All sorts of things to play with:
-divorced couples with kids deciding whether to stay together or not have kids.
- Revenge against murderers when they have not yet killed.
- Couples who have not yet cheated on one another.
- Joy at a second chance with dead friends/relatives.
- Politicians getting lynched.
- Despots killing those who would have later rebelled and killed them.

Sandra and I won't be at Bouchercon this year so we can collect links at Spinetingler if you want.

That's fine, Brian. I am sure Todd will be happy to have someone else take it on. The people on here today will probably be about what there is.

Happy might be an overstatement, but I'm certainly busy enough, and not with the BoucherCon, sadly for me.

It was last year, wasn't it? That gives you a sense of how much time to reflect or recognize the date I've been having.