HOW I CAME TO WRITE THIS STORY": Patti Abbott 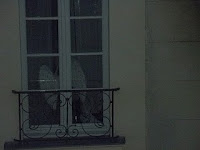 "THE ANGEL DEEB"
from Deadly Treats.

As some of you may remember, on our trip to Paris in May 2010 I was quite taken by this vision across the street. Wings of some sort were propped in the window and I did a flash piece about it, but it influenced a longer story even more.

When Theresa Weir invited me to submit a story to a collection she was putting together, the entire story fell quickly into place. It was to be a Halloween story for a volume she was then calling BATS IN THE BELFRY. At the time, she planned to publish it herself, probably as an e-book

I wanted my story to be reminiscent of THE METAMORPHOSIS, but lighter in tone. I soon came up with the idea of the idea of wings appearing suddenly on the shoulders of a pickpocket.

I don’t know why I was so reluctant to tell him (a doctor). Was it fear of what he might tell me or embarrassment at my…problem’s… oddity? For several weeks, I’d noticed a growth on both sides of my upper back. Felt it more than saw it, of course, because it was in one of those places hard to spot—even in a mirror.

“I seem to have some sort of… enlargement.” The word growth seemed laden with implications I didn’t want to introduce into our conversation.

My hope with the story was to make it believable but magical at the same time. So Deeb's interaction would be with a little girl.

“What’s your name anyway?”
“Deeb,” I said, without thinking.
“That’s a funny name for a guardian angel. I suppose I can get used to it though.”
“Sure, call me Deeb.” What did it matter if we never met again?
“You can call me Princess Isabella.” I nodded. “And next time you come, try and remember to bring me a greeting gift.”
I nodded again. “I’d better be off.”
“I especially like barrettes if you can’t think of something.”

I had a lot of fun writing this story. And I am happy to have it included in this terrific collection.

Please for Christ sake help this poor boy from Haiti

My copy of Deadly Treats will hopefully be in the mail soon. Interesting post -- I like the idea for this story, very fresh.

Interesting that you were doubly inspired by that view...and I wonder what in your post triggered that spam response.

Looking forward to the book.

I can understand the inspiration coming from that scene. You gotta love that sort of thing. LIke the fairy construction Lana and I saw in Sedona.

Looking forward to that!

And me to yours.