My Life at the Theater, Oleanna 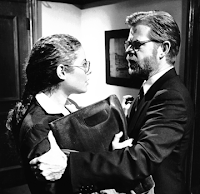 WARNING: This is a tough final scene and it does not always end like this.

I saw this David Mamet play at the Library Theater Company in Manchester, England in 1995. At that time I felt the conflict over sexual harassment was interesting and it was a well done production starring Melanie Hudson and Robert Jezek. It concerns accusations of improper behavior between a professor and a student. It was a nerve-wracking play to watch with a particularly difficult second act. It is said Mamet wrote it in response to the Anita Hill/Clarence Thomas hearings.

I have seen it again in a local production and as a movie. The ending of this play and audience response to it has changed over the years. Who comes out on top and what we think of it has changed, in other words.

It has become clear that Mamet never intended this to be a fair-minded look at sexual harassment. At the time, we knew less about him and his views.

I wouldn't see it again.

Thanks for the heads up~~!

At one point, there was going to be a movie version of Francine Prose's Blue Angel, but I haven't heard anything about it lately. Have you?

No, Erik. But crackerjack book.

Damn! I knew there was a reason I've avoided this one. And now I'll never watch it in its entirety. Was that his wife Rebecca Pidgeon? She always bothered me in his con artist movies. She can come off so smug and snarky. But you can only feel for her in that brutal scene. There are early signs of this kind of savagery in one of Mamet's first plays -- THE WOODS -- which we did when I was in college and was so powerfully acted that it still haunts me.

This is an example of where I think as if I was still involved in theatre.

I've seen this play too, but it was about 10 years ago now. I've always felt for whoever was directing; it would be difficult to cast as you need equally powerful actors but the female needs to be so much younger than the male.

A dynamic not altogether unlike, but much nastier than, HOLY SMOKE...so Kate Winslet and Harvey Keitel could probably pull it off, or could've when they made that film.