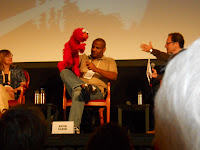 
The Traverse City Film Festival, the brainchild of film maker, Michael Moore, takes place the last week of July. This was its seventh and biggest year with over 90 films being shown. Although there are a handful of more traditional films, the emphasis here is on foreign, art house, and documentary films. There are also free panels on various topics every morning, film lounges to discuss films with fellow viewers, a film school on aspects of film making, and a music stage. There are student films, shorts, everything you would expect to see at an event such as this. The largest outdoor screen in the world shows free films at dusk every night.

You can immediately sense this festival is more about celebrating a love of movies than in making a lot of money. The event is staffed by hundreds of volunteers with free buses transporting guests from one theater to the next every seven minutes. I cannot emphasize how much fun this festival is. Lots of the film makers and stars are there for Q and As after the film.

Traverse City is a lovely city set on miles and miles of beaches of Lake Michigan. Vineyards are minutes away; Interlochen, a community for musicians, a half hour; sand dunes, under an hour.

But let’s talk about the movies.

This year’s special events included a 100th birthday celebration of Roy Rogers, the 50th anniversary celebration of To Kill a Mockingbird, a tribute to Iranian film maker Jafar Panahi, and a salute to the public employees of the Great Flint Sit-down Strike.

We were only there for three days but saw four fine films and attended two interesting panels.

Higher Ground, directed by and starring Vera Farmiga, is based on Carolyn S. Briggs memoir of her life as a born-again Christian. The film gave a very balanced look at life in a close- knit religious community. It avoided the clichés that often creep into films like this by giving attention to supporting characters as well as its lead. No one was painted as all good or bad and hence the struggle of Corinne to find a place in the world was very poignant.

Black Butterflies is a biopic about South African poet, Ingrid Jonker. Carive von Hauten gives a mesmerizing performance as Jonker, who is the victim of a repressive father (Rutger Hauer), South African’s cruel apartheid years, and inner demons, which eventually drive away those who love her. I wish the director (Paula van der Oest) had come up with a methods to give the audience more of a taste of her poetry, but that’s always the problem with movies about writers, isn’t it?

Bride Flight was the sudsiest of the films. A period drama, it follows the intersecting lives of three brides who fly from Amsterdam to New Zealand after World War 2. This was another film that profited from its lush landscape. I didn’t mind the soap operatic feel of it—there was enough story, character, and scenery to divert me.

Rid of Me was the sometimes painful and often funny story of new bride (Katie O’Grady) who can’t quite measure up to a past girlfriend when she travels with her husband to Portland to meet his boyhood friends and start their married life. Portland and indie movies is a perfect fit and this film drives that home. The film’s success was largely due to the performance of O’Grady who captured her character perfectly, traipsing winningly through some startling life changes.

We attended two panels. The first was a discussion of the documentary Being Elmo. The panel consisted of the entire team that put together the movie, which really is about the puppeteer who operates Elmo, Kevin Cash. It made me very sorry the documentary was sold out.

The second panel was a gathering of many of the documentary makers with films at the festival and a discussion of their films, the problems they encountered making them, and various issues in the business. It was also terrific. Documentaries, once confined to the smallest of venues, are now some of the most interesting films of the year.

I encourage you to consider making this film festival a destination if you have an interest in films. You can find out more about it at: http://www.traversecityfilmfest.org/

Sorry I missed that, it sounds fantastic. Every single year, I never fail to completely forget about the Traverse City Film Festival...

I'll remind you next year!

Really cool. Thanks for the excellent coverage~~

A person from socal gets to northern Michigan only once in a lifetime, and I've already done it. Going to have to make do with the Palm Springs Film Festival. Thanks for the report. Sounds like a wonderful time, and I am glad you had it. Will try to put the titles you mentioned into the SAVE queue at netflix.

I'll trade you PSFF for TCFF next year.