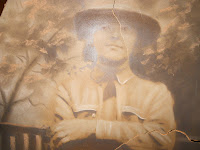 Uncle Albert's photograph falls off of any wall it's hung on. He looks just like Phil did in his youth. We never knew the man in life but he haunts us if we let him.


Anne Frasier contacted me about a Halloween-themed multigenre anthology she was editing and asked if I would write a story for it. Saying yes was easy. I love Halloween. And I love multigenre collections, being an omnivorous reader myself. At first I thought I’d do something set in pagan Britain where the holiday has its roots. But Anne was looking for stories in the 3,000-word range, and I didn’t think I was skilled enough to develop a historical setting unfamiliar to many readers as well as tell a good story that succinctly. So I opted for a contemporary setting everyone would immediately recognize, one I wouldn’t have to devote any words to explaining.
Then I asked, What’s fun about Halloween? Costumes. Costumes are definitely fun. We can be anyone we want on Halloween. We’re granted the power to reimagine ourselves. And costumes are close cousins of disguises. What if a lizard lady from another planet wore a burka in public so she could pass as human? And what if she was stuck in a small town where a woman in a burka was just slightly less alarming than a lizard lady from outer space? I thought that was interesting. I had a protagonist.
What else is interesting about Halloween? From its origins to today, it’s a test of the bonds of community. Children, the community’s most vulnerable members, have license to demand food from the adults of the community, even adults they don’t know. Adults who deny this basic hospitality may be subjected to nonviolent “tricks.” My homesick, burka-wearing lizard lady would view Halloween as an opportunity to be accepted into her adopted community. But maybe in past years, no one let their kids go to the Muslim woman’s house. So this year, she takes a more aggressive approach. My protagonist had a goal.
And how does an unfriendly community react when confronted by outright hate? My thought is, with decency. I had a plot.
And then I wrote it, and tone and voice emerged, and the story was told.

Like Bukowski said, it's the little things that send us to the mad house. The shoelace snapping. The gate creaking. The leaky tap dripping. The toilet blocking.

We've all seen it: someone buys a house or a flat which is supposed to be a bargain and then the place eats their money as they try to fix the unfixable. And then the rest of their life starts to crumble.

So this was the idea behind This Old House, the story that Anne Frasier has published in Deadly Treats. And I'm so pleased to have the story in there.

Shakin' Stevens meets Oscar Wilde would be my pitch. No, really.

Bio: Paul D. Brazill's stuff has appeared in loads of classy print and electronic magazines and anthologies, including the 2011 Mammoth Book Of Best British Crime. His noir/horror series Drunk On The Moon and short sharp story collection Brit Grit are out now.His blog, You Would Say That, Wouldn't You? is: http://pdbrazill.blogspot.com/
###
Posted by pattinase (abbott) at 6:00 AM

Patti - Thanks for hosting Paul and Paula (Hey, there's a song team in there somewhere ;-).

Paul and Paula - Thanks for sharing the genesis of your stories. It's always interesting what the spirit of Hallowe'en seems to do to people's imaginations. It is a time for disguises and houses that end up taking on horrible lives of their own..

Halloween is always good for some cool ideas and stories.

"Shakin' Stevens meets Oscar Wilde would be my pitch." I'd buy it! Sounds like a fun collection. Must add it to the list.

Great stuff. Need to grab this one before Halloween. Thanks!

Thanks for letting stick my nose in here, Patti.And thanks for the comments.