Gary Cooper could play any role and this is a good example. Directed by William Wyler, I watched this film over and over as a teenager. Strangely, I seldom find it on TV now. In this era of hyper-religiosity, perhaps the pacifism of Quakers is too tame. 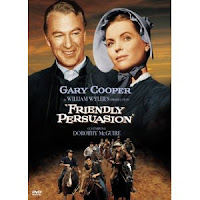 ivil War. Dorothy McGuire plays his wife with equal skill. They are very persuasive as a nineteenth century Quaker couple.

The film is based on a novel by Jessamyn West and it's about the effects of the Civil War on the Birdwell family, the parents and the children: Anthony Perkins, Phyllis Love, and Richard Eyer. The tenets of pacifism are not easy to follow, especially during the Civil War.

Each of the Birdwells feel differently about the war and Anthony Perkins (the young son and Oscar-nominated here) feels it his duty to defend his home and family.

Friendly Persuasion's popularity was helped by Pat Boone's record of the title song which was a Gold record for him. The film also oozes the integrity of its characters.

Friendly Persuasion will pleasure thee in a hundred ways.

Patti - Oh, that was a good movie and in my opinion, an even better book :-).

West was a second cousin of Richard Nixon, but unlike him was a real Quaker.

Never saw the movie because I disliked the song so much. Did read the book. Liked it a lot, but the I liked all West's books.

Oh, I'd forgotten that, Jeff.
It's better than its song, Bill.

What I didn't realize until I looked it up was that she attended a Sunday school class taught by Nixon's father Frank and this led her politically toward socialism.

I have only see snippets of the film but have not sat down and watched it from beginning to end ... will make a point to do so.

It was on Turner Classic Movies not too long ago. It differs from the book in that, in the book, the rebel raiders do not encounter the makeshift defense force in which the Birdwell son is a member.

This film, and its music, etched itself upon my heart. I watched Gary Cooper, the quiet western hero, play a gentle Quaker with such grace and dignity as I had never seen in him. Years later I met Dorothy McGuire in her home and my joy was complete. It is a story of tenderness and principle.

Richard-so nice to hear from you and hope you are enjoying your respite from blogland.
It was just such a story. Can't think of many like this in many years.

This is another one for me that I think I've seen only in pieces as a youth (its cast was more popular, after all, in the '70s than they are today, hence its relative frequency of appearance then...). I will certainly give it a chance (I've read only a little of Jessamyn West, and it showed her talent, though West's one attempt at sf I'm aware of was Not Good).