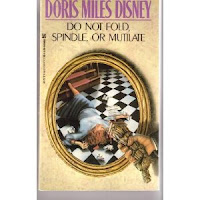 Michel Williams
I’m a Northern Californian with a gentle Texas influence (otherwise known as husband of forty years.) Been a reader all my life, knitter, sometimes weaver and shop owner, but my computer prowess consists of an occasional conquering of the comment process. In a long-ago time, the bookmobile ladies who stopped on the corner every Saturday carried “Do
Not Fold, Spindle or Mutilate.”

Do Not Fold, Spindle or Mutilate by Doris Miles Disney

I read this book in 1970 then picked it up a couple months ago as a
library discard and re-read it for the first time in what…forty-one
years! Fifty-eight year old women are no longer considered elderly, nor are they called spinstresses and men aren’t much called beaus anymore. But people still get into mischief and Doris Miles Disney’s book is still a fun story of cause and effect.

At 58, ever a clown, Sophie T. will do anything for a joke and when she encourages her bridge group to invent “tall, blonde, blue-eyed” Rebecca Meade (Sophie T.’s dead aunt’s name) for a mail-in date form to Scientific Associates, trouble is not far behind. When one of the date-matches calls Sophie T.’s unlisted phone number, Sophie switches to a soft drawl, strings the caller along and, as Rebecca, makes a date with him. Only later does she have second thoughts.

“She tried to shrug off what she’d done on the way to the parking lot, but wasn’t quite able to. She wished she hadn’t gone to the Calico Club. Or, better still, that she had refused to make the date. It wasn’t funny, after all. It was stupid. It was mean. Childish. Something to be ashamed of, never to be mentioned to anyone.”

The unlikely hero appears toward the end of the book; an irascible street-smart cat named Helen who deigns to live with a real girl called Becky Meade.

It was spring before she found out that Helen was an altered male cat. By that time he had learned to answer – when he felt like it – to his name. It was too late to change it.”

DO NOT FOLD, SPINDLE OR MUTILATE was made into a 1971 made-for-TV movie with Helen Hayes, Myrna Loy, Sylvia Sidney, and Mildred Natwick. At the time they were (respectively) 70, 65, 60 and 65 (more or less).

I didn't watch it.

I did! It was nice to have all those women on the same screen.

Around that same time we saw Helen Hayes on stage opposite Jimmy Stewart in a revival of HARVEY, which was fun.

Oh, my. That must have been. I think that is at Stratford of the Shaw this year. Or maybe last.

Sometimes a read like that is just a perfect relaxation read.

Patti,
Thanks for posting my review. I appreciate it. Great graphics, too!
Michel

My entry for this friday is here: