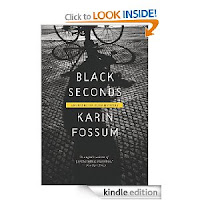 And the challenge is: blog about books or stories written by women. If you'd like to join in, Barbara Fister is here.

BLACK SECONDS is the second book by Karen Fossum I've read. And the ending really caught me up. An unexpected ending is not a prerequisite for me so I am always amazed when someone pulls it off. And pull it off, she did in a most satisfying way. It all made sense, the clues were there, and yet I didn't see it coming.

Fossum takes elements of the police procedural and mixes them with psychological drama in BLACK SECONDS. Women writers seem more interested in doing this. Less concerned with action and more concerned with motivation and character, which makes for a good read for me. The great exemplar of this sort of writing was Margaret Millar and I think Fossum is a worthy successor.

Inspector Sejer is the series detective in the two Fossum books I have read and it is he who doggedly follows the few threads he is able to find in the story. BLACK SECONDS concerns the disappearance of a ten year old girl on a yellow bike.

A secondary plot deals with a cousin of the girl--a teenager who crashes his car. This plot gradually dominates the novel. But the two strands come together in the end.

Karin Fossum is very adept at both keeping you reading and in putting depth and complexity in her plot. I am anxious to read a third book by Ms. Fossum.

Anyone else read Karin Fossum?

I've written it before and I'll write it again: Go Gusties!

Probably my favorite female writer is C. L. Moore, although Leigh Brackett is close, with Andre Norton coming in somewhere down the line.

I wish I could say I had read them but I haven't. The closes I could get would be Ursula Lequin.

Oh yes, I have read several of her books. I enjoyed her early Sejer stories (more traditional police procedurals) and her later ones (more focus on the psychology and the consequences of serious crime).

And I agree that women write psychological drama in another way than men (less action, more character analysis).

Go Gusties! Just not to St. Olaf. (Sorry, inside joke for Gerard.)

I have read several of Fossum's books, but not this one. Consider it added to the TBR. She has a habit of wrapping up a story, then throwing in an unsettling tidbit just when you think it's all over. Very intriguing writer. She's going to be one of my challenge writers.

Exactly what she did here.
Anxious to read another one and also to continue with the challenge. Thanks for coming up with it, Barbara.