HOW I CAME TO WRITE THIS BOOK: Rob Kitchin 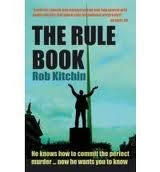 
The advice: The first line needs to jump straight down your throat and grab you.My response: Now there’s an idea.

The line: His eyes fixed on the sword and started to travel its length, down from the black handle, over the plain hilt and along the two inch wide shaft to where it penetrated the young woman’s mouth.

It all fell into place pretty quickly from there. A police procedural following several police teams as they try to catch a killer who is leaving a trail of seemingly random victims dotted around Dublin, Ireland, each accompanied by a chapter from a book on how to commit the perfect murder. I’m a fan of police procedurals. Choosing to write one was an easy decision.

There were four things I wanted to try and achieve. First, that the police investigation was as realistic as possible. I normally don’t mind authors taking liberties with how things would normally occur with the exception of fiction, such as police procedurals, that seek to portray a social realism. Too often I get frustrated, and I know police officers do as well, with stories that include procedures or events that simply would not happen in real life. The result is that The Rule Book has a fairly large cast of characters as in cases where there are multiple linked murders, each murder is investigated by a separate team that reports to a central coordinating team. No set of murders are investigated by a single inspector with his trusted sergeant working in seeming isolation from anybody else. To give a focus to the book, the lead character is a Detective Superintendent whose job it is to run the central coordinating team. To make sure I got all the detail right, I spend quite a bit of time talking to a former Detective Superintendent from the Irish National Bureau of Criminal Investigation, and he read through drafts of the manuscript a couple of times as well.

Second, I wanted the lead character to be an ordinary police officer, not some maverick or super-intelligent investigator. I wanted him to be immersed in a situation where he is out of his depth, where he’s trying to cope with multiple pressures at home and work and isn’t doing such a good job of it. Third, was to keep the tension and pace high from the get-go. Fourth, I wanted to subvert the usual endings of crime novels. A large proportion of crimes in real life are not solved and cases are often open-ended and messy.

The next stage of finding a publisher took way longer than writing the book. In the process, the manuscript was edited and tweaked in response to the advice of agents and editors. One victim was my fourth aim. The view of agents and editors seems universally to be that ambiguous or open-ended or messy endings are a definite no-no; there should be definite and clean resolution. We compromised. Kind of. There were a couple of other compromises around the description of characters and violence. The original draft had little of both. I prefer readers to use their imagination in respect to both, filling in the gaps based on what characters say and do. I was asked to add in both. Thankfully the reviews to date have been very positive (see http://theviewfromthebluehouse.blogspot.com/p/rule-book.html), but where I have received critique it is related to these two aspects. I’m happy with the book, but if I have a regret it’s that I didn’t resolutely stick to my guns on all aspects of style and content.

The other thing I probably shouldn’t have done was write the second in the series without having placed the first book. There’s not a lot you can do with a child book when the parent is still waiting to see daylight. That book, The White Gallows, has subsequently been published (see http://theviewfromthebluehouse.blogspot.com/p/white-gallows.html). The third, Ghostland, is finished and presently under consideration by a publisher.

The Rule Book was recently released in the Kindle format. Here are some links if it sounds like your kind of book.

Patti - Thanks for hosting Rob.

Rob - I agree with you that the first line in a book is essential. And you chose an excellent for The Rule Book. Folks, if you haven't read it yet, check it out. A fine read!

Patti, thank you for giving us this opportunity to look into Rob´s route to publication.

Folks, if you haven´t read this one, you are in for a treat! Colm McEvoy is just as human as Rob intended.