"HOW I CAME TO WRITE THIS STORY" Chris LeTray 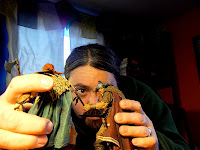 Curious how you end up doing well with something that starts out making your skin crawl. There's a lesson in that somewhere.

If it affects you it'll probably affect someone else and is good food for writing!

I think it started in Philly.

Ron, a lot of urban fantasy does make my skin crawl, yes. Granted, I haven't read a lot, but what I have was full of traits that really annoyed me. If I had to compare it to anything, it would be the things I really don't like about TV shows like Buffy (which I've only seen a couple episodes of) and True Blood, which I loathe. Just not my thing, which is why I was a little bummed at myself for having written something that could probably be marketed in that genre.

But, as with any kind of writing, knowing what you DON'T want to do is half the battle.

My answer is St. Louis and that was an interesting path to publication, Chris. Great job!

I'd also like to point out that I'm not just offering a copy of Noir at the Bar, but I am also including both of Chris Farnsworth's novels, Blood Oath and The President's Vampire.

NOIRCON started in Phlly but not Noir at the Bar, I don't think. But I should check to be sure.

Noir at the Bar did originate in Philly, but that isn't where this story, or any of the ones in the book, originated.

Well, I think Rob needs to be included with Sean and Bobwire. Will you draw, Chris?

I certainly can. I'm headed out of town; I'll draw when I return on Thursday, if that's cool. I didn't get to a post about this until late this afternoon/evening.

Sean's the winner of the drawing!

Thanks Chris, and Patti. I am really looking forward to this.