HOW I CAME TO WRITE THIS BOOK: Jeff Shelby's Liquid Smoke 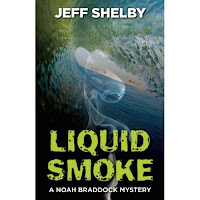 When I completed my second book, Wicked Break, sometime in 2005, I knew that I needed to take the next book in a different direction. I didn't want to fall in the deadly trap that every series writer faces and continue to write different versions of the same story. And I wanted to challenge myself as a writer. I wanted to write a “bigger” book, one that forced me to think a bit harder about what I was doing.

It came to me easily. I read a news article about a death penalty case and it struck a chord with me. As someone who is anti-death penalty (actually, I'm anti-killing the wrong guy penalty) I thought it would be a challenge to write from the viewpoint of someone who was in favor of the death penalty. It would force me to think from the other side of the equation. When you write in first person like I do, it's easy to let your own views and opinions filter into your characters. Not quite as easy when your character believes something completely different than you do. It forced me to write a much different book than I'd ever written before.

And when I wrote “The End” I was thrilled because it felt like the best thing I'd ever written. My early readers and my agent agreed. I'd pushed myself and my characters and it worked. I wrote a big book that would break out the series.

And, uh, then I got dropped.

As happens regularly in publishing, my publisher decided to go in a different direction. Had nothing to do with the third book and everything to do with sales and some changes within the house. And all of a sudden, my great book didn't have a home. Didn't feel fair, but that is publishing.

I was optimistic, though. I'd received great reviews on the first two books and even though moving a series isn't ideal, I was hopeful that we could find a new home for Liquid Smoke.

It only took five years.

Five long years. Five long years that included: multiple rejections, rewriting the book as a standalone with new characters, more rejections, changing agents, going a year or so without an agent, finding a new agent who believed in the book, three other completed novels that stalled out and trying to get right with the idea that the best book I'd ever written would never see the light of day. I really got to the point where I believed it wasn't going to happen.

Fortunately, my new agent disagreed. She thought it still had legs, that she could find it a home. I was skeptical, but figured there was nothing to lose in shopping it again.

And she was right. (Which is why she's the greatest agent walking the face of the Earth.) She sold it to Tyrus Books, who took it on with great enthusiasm and turned it into an even better book. All of the excitement I felt at the completion of the book five years ago is back. I can't wait for people to read this book when it's released on August 23rd.

It's still the best thing I've ever written.

Patti - Thanks for hosting Jeff.

Jeff - I'm so glad your agent convinced you that your book would sell. What a fascinating premise - a main character who believes very differently from what you believe. I'm going to have to really think about that as a possible way to grow as a writer...

Congrats man. I know much of this kind of feeling. to write a good book and then have it languish and just sit. Glad Liquid Smoke is gonna make it.

Looking forward to this! Ben is a smart one.