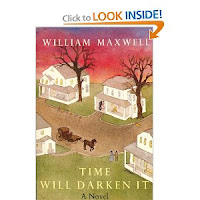 William Maxwell was one of my favorite writers. He died about a decade ago leaving a handful of novels and many shorts stories and essays. My favorite of his novels is TIME WILL DARKEN IT.

When the King family is paid a visit from distant Southern relatives, Austin King, eager to impress a female cousin and repay their kindness to his father, behaves in such a way as to threaten his marriage, his law practice, and his reputation as a young attorney. His pregnant wife is especially torn asunder by his actions.

Maxwell makes every character in this seemingly ordinary story come to life. I can't think of many books I closed so reluctantly and yet with such complete satisfaction. His novels include:
For more First Wednesdays reviews, visit Barrie Summy right here.
Posted by pattinase (abbott) at 7:00 AM

Nice choice. Maxwell is another of the list of authors I've always meant to try but so far I haven't.

Maybe this will give me the push I needed.

OK, I reserved the Library of America edition of his EARLY NOVELS AND STORIES.

So Long, See You, Tomorrow is also very good. I'll bring you TIME WILL DARKEN IT.

I've never read anything by Maxwell, but will definitely be adding him to my list! The last one sounds especially intriguing.

I love it when that happens, when you're disappointed to see the book end, but so satisfied, you just let the afterglow simmer for awhile before picking up another book.

Never heard of Maxwell, but I always enjoy a good Southern story. Plus, any book that you closed "reluctantly and yet with such complete satisfaction" is well worth a look. For all the books I read and enjoy, few meet that criterion.

I too have never read/heard of Maxwell, but I'll have to check him out the next time I'm at the library.

I'll see if I can find anything on my shelves to bring you. (If you have anything I've mentioned in mind, let me know.)

Jeff-Seeing you and Jackie will be pleasure enough.

Thanks for introducing me to this author. Time Will Darken It sounds intriguing, especially your comment about finishing with complete satisfaction. I like the cover art too.

I love learning about an author. Thank you, Patti! And I'm looking for a few books to load on my kindle (yes, I got one for Mother's Day :) ) for our family vacation! This one sounds as though it fits the bill!