HOW I CAME TO WRITE THIS BOOK: Russel D. McLean 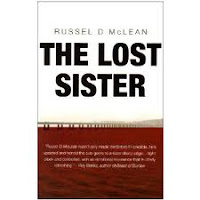 The Lost Sister had originally been intended to be the first book featuring PI J McNee, the dour, Scots Private Eye who debuted (along with his author) in The Good Son. An early draft, written for my then-agent featured the same basic premise: a missing girl, a mysterious private investigator who knows more than he’ll say and a potentially obsessive woman with a connection to the missing girl. Back then, it was called Twister Sister, a title later nixed when both myself and my now-agent realised it sounded like the title of a very different book to the one it became. Also, it’s the name of a slightly ludicrous hair metal band, which again gave entirely the wrong feel. I guess it’s one of those things you come to realise the more you write; the proper title can make or break a project.

There was a lot in that early draft that was plain wrong. An astonishingly embarrassing number of missteps and stupid plot twists that probably seemed like a good idea to a writer in his early twenties flush on recent professional short story sales and that first interest from a professional literary agent. A writer who was making it up as he went along, who still didn’t quite get the difference between structuring a short story and a longer work.

But the idea wouldn’t go away, even when I dumped the story to go back to one of my first ever story ideas that would turn into The Good Son, my debut novel. Something about this 14 year old girl, Mary Furst, and her mother who was clearly hiding some secret wouldn’t go away. But I needed the secret and the revelation to be meaningful and that wasn’t something I was capable of dealing with back in those days.

But when I was asked for a sequel to The Good Son, I knew it had to be this idea that would become The Lost Sister, and I figured, while writing The Good Son, I’d found a way into this second novel.

In that first novel, McNee had found himself involved with a local hard man named David Burns. Burns was my favourite type of criminal; a man who justified all his bad actions, who truly believed that he was above the law. He called himself a “businessman” thought he was a pillar of the local community and somehow this excused all that he did. He was a fascinating character to me; a complex and brutal individual. Like McNee, of course, I hated what he stood for and what he stood for. But I knew he had to return. And I began to wonder what McNee’s reaction would be if he found that the innocent, missing girl he was searching for, was somehow connected to David Burns. In the end, it turned out that missing Mary Furst was actually Burns’s God-daughter. Maybe that seems to scream an obvious answer as to her disappearance, but nothing is simple in the world of J McNee and the truth about Mary’s disappearance turned out to be more complex than I initially believed it would be.

More complex, yes, but also more satisfying. And it gave me the impetus to run up a readable draft of The Lost Sister which was, of course, improved upon by my readers and my editors and agent. As the book developed, I realised that my early problems had all been down to genre expectations. In its first iteration, The Lost Sister was rife with thriller clichés and a psychotic who could have come straight from central casting. As I worked on my second attempt at the premise, I came to realise that there are other stories that need telling; stories with a complex and unsettling morality that ask questions about our values and ideals. Crime fiction is the ideal vehicle for complex moral choices, and for showing that even with the best intentions sometimes we can commit unforgiveable acts or do things we may come to regret for years.

I’m extremely proud of The Lost Sister. I like to think it’s the kind of crime novel I’d devour as a reader. When it came out here in the UK, the reaction was tremendous particularly in the emotional investment many readers seemed to have in the book’s final scenes and revelations. I’m glad that I put the book away for such a long time before coming back to it; proof that some ideas need to ferment and bubble before being allowed into the world.

Speaking of which, Book #3’s been another idea I’ve had for a good few years… I think maybe it’s the right time to pull that out of the airing cupboard…

Russel McLean is also the author of THE GOOD SON. His books are available through St. Martin's Minotaur in the US and Five Leaves in the UK.

Both books (The Good Son & The Lost Sister) are terrific reads ... I had the pleasure of reading the first way back in its early stages ... this Scot can write.

He's no Rand McNally with a map though ... he's obssessed with McDonald's (must be the name--anythng with a Mc or something) and tends to gravitate toward them. I should've told him to meet us in front of the Staten Island McFerry ...

HA! Heck of a nice guy via email anyway.

Another excellent installment and so much of it rings true regarding looking at something you wrote in the past and how it can be improved over time. Def high on my TBR list, especially after reading this.

Much of the time I can't really get into a writing project until I have a good title. And I find, too, that many projects need a long time to jell.

I actually have a "Twisted Sister" album.

It sounds as if it was a brilliant idea to let the plot stew for a couple of years.