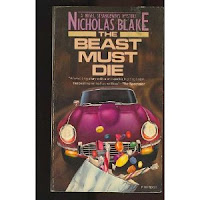 Cecil Day-Lewis was the poet laureate of England for a time in the late sixties, early seventies. He's also the father of Daniel Day-Lewis. But as his alter ego, Nicholas Blake, he wrote an enjoyable series of detective stories featuring Nigel Strangeways. All are highly literate and fun.

A man, writing in his diary, states his intention to find and kill the hit and run murderer of his son. But things go wrong and someone gets to the murderer first. Strangeways is called upon to sort things out.

The Beast Must Die is among the best Nigel Strangeways mysteries although all of them are fun to read.
Ed Gorman is the author of STRANGLEHOLD, TICKET TO RIDE and numerous other fine novels and anthologies. You can find him here.

Think about it. The precursor to Dick's dystopian future worlds resemble in many respects Goodis' 1953 world of down-and-out Philadelphia. Worlds of poverty, violence, despair. And protagonists whose well-earned paranoia often lapse into almost hallucinatory reactions. Cloying, claustrophobic worlds where death is often a mercy.

In the case of THE NIGHT SQUAD we have another example of the Goodis-Dick connection, that of the utter isolation of a man in society. Here though, unlike Dick's protagonists Corey Bradford is not innocent. He's an ex-cop who shook down everybody in the neighborhood called the Swampland. The slum neighborhood where he grew up and has lived out his life. After he got bounced from the force, a kind of shunning took place. The people here hate him so much they generally refuse to acknowledge him.

His luck changes when he saves the life of Walter Grogan, the gangster who runs everything in the Swampland. Grogan likes him and puts him to work with the promise of fifteen grand if Bradford can find out who the two men were who tried to to kill him. They tried to make it look as if it was just a mugging but Grogan knows better. Somebody in the Swampland is trying to kill him and take over his territory.

Goodis puts a twist on this twist. Soon enough an angry cop hires him to double-cross Grogan; Bradford will report back everything he learns from the gangster. Or will he?

I'm not an expert on Goodis (hell I'm not an expert on anything) but I read a few reviews after I finished the book and the impression I got is that it's not considered one of his best mainly because of how he handles the moral dilemma faced by Bradford.

I admired the book. It's the equivalent of somebody holding your head under water until your lungs start to burst--that grim, that frightening. But man I kept flipping those pages because this was a guided tour of hell and I was hooked. Goodis is at his best here dealing with a wino named Carp, the only honorable person in the book except maybe for Bradford's ex-wife. Nobody created the lost angels of the underclass more vividly than Goodis. He broke your heart with them.
I recommend this novel because of its bleak, Phil Dickian power. This is noir cast in phantasmagoric terms.

BURN by Jonathan Lyons is my pick this week. Found at
http://kevintipplescorner.blogspot.com/

My Friday's Forgotten Book is up:

I'm a big Philip K. Dick and crime fiction fan, so that David Goodis book sounds right up my alley. Thanks for the recommendation.

I liked NIGHT SQUAD for all the reasons Ed mentions -- a terrific book.

Jeff posted my reveiw at The Rap Sheet earlier this morning.

Patti: Of the Blake books I've only read THOU SHELL OF DEATH - good one. My library doesn't have any of them unfortunately. But little by little, I'll get my hands on them. No one but me seems to think that this is more than coincidence: Agatha Christie using the name Nigel Strangeways for the killer in one of her books. A killer who, by the way, was mad. I've always wondered...

They are definitely golden age "mysteries." But I always have loved them.

Wow, what a busy day...barely time to note that I remembered that "Blake" was a poet's pseud, but not that he was so prolific as Blake over so long a period. It's difficult not to be aware of Goodis, in part because even before I dropped in at this last NoirCon (ex-GoodisCon), Ed Gorman was among the anthology editors who introduced we readers who might've missed him earlier to the works of mighty despair. Ozymadias is jealous, doncha know.