HOW I CAME TO WRITE THIS BOOK, Dani Amore 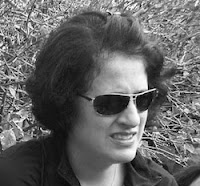 I was in a private cabana, poolside, at the Four Seasons Hotel in Beverly Hills when I pushed aside my breakfast of Lobster Frittata, set down my glass of Dom Pérignon, patted my rock hard abs, turned onto my side and said to last night’s love partner, George Clooney I think it was – not really sure – and said, “I’ve got a great idea for a crime novel – fetch my laptop, Sugar Buns!”

Kidding of course. I think it was actually Christian Bale.

Death by Sarcasm started with a character, totally unlike me, who tended to hide her true feelings behind humor. Mary Cooper rarely lets anyone in, and when she does, she usually greets them with a welcome not typically employed by the Emily Post School of Etiquette.

The other thing about Mary Cooper is although she would never admit it, family is very important to her. That’s another big difference between my character and its author. I take the same approach to my family that a microbiologist takes to Ebola. Namely, store them in a place from which they can’t escape, and take them out maybe once a year or so to study them, always wearing gloves and protective clothing.

In Death by Sarcasm, Mary learns that her uncle was murdered behind a comedy club in Santa Monica. She investigates and soon, skeletons, some old, some new, begin emerging from dark places only Los Angeles and Hollywood can produce.

It’s the book I’ve always wanted to write. A strong, tough, independent woman, who understands the unique challenges someone like her faces, but doesn’t necessarily place a huge priority on meeting anyone’s expectations but her own.

I also wanted to write a crime novel that moves. I love fast-paced fiction, and I felt the story should be as relentless as Mary’s biting wit. I hope I accomplished my objective.

So, despite the panicked phone call I just received from John Grisham, who begged me not to start my publishing career that is sure to be his ruin, I’m excited to see what others think of Mary Cooper.

I’d love to know what you think. (And that was sincere – an action so rare for me that I may have pulled a muscle.)

Dani Amore is crime novelist living and writing in Los Angeles, California. Death by Sarcasm is her first book. You can typically find her over at her website, deadlysarcasm.com

Cracking stuff! Death By Sarcasm looks to be a beaut.

You had me going there for a minute! :)

Patti - Thanks for hosting Dani.

Dani - How neat that your novel started with one character! That's the way I write, too, and it's nice to know I'm not the only one.

Thanks, everyone. Hope you enjoy the book! And thanks, Patti, for hosting me.

Who on earth is John Grisham? ;)

I enjoyed Mary Cooper tremendously! Been recommending Death by Sarcasm to all my friends for a very selfish reason - I want you to write a sequel.

Hey, thanks, Carol! I am working on the sequel, it's going to be called MURDER WITH SARCASTIC INTENT.

Dani, you rock. And for anyone who hasn't read DEATH BY SARCASM yet, it has the same fun smart-ass tone of Dani's essays.