I walked in a few days ago and caught a few minutes of Susan Hayward playing Lillian Roth (thanks for the correction which came to me from Mark Murphy) in "I'll Cry Tomorrow."

Wow, this sort of movie has practically disappeared--the overwrought portrait of a woman done or gone wrong. I adored these films as a kid: "With A Song in My Heart," I'll Cry Tomorrow, "I Want to Live." "Back Street" "Where Love Has Gone,"" They 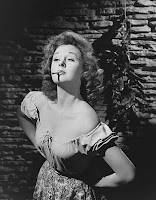 Won't Believe Me," "Valley of the Dolls." I saw them mostly on TV but they really pulled me in. I suppose Lifetime has picked up the torch for purple prosed movies, but you need the big screen to really sink into these stories.

Almost all of Hayward's movies seemed to be of this ilk. And she was pretty darn good at it. In 1947, she received the first of five Oscar nominations for her role as an alcoholic nightclub singer in Smash-Up, the Story of a Woman and eventually won an Oscar for her portrayal of murderess Barbara Graham in "I Want to Live."

I doubt anyone much remembers her now--or at least those under fifty. She died of a brain tumor in her fifties.

Who is your candidate for a now under-appreciated actor? Is it the movies that have changed, acting styles, what?
Posted by pattinase (abbott) at 3:58 PM

I'd love to see (and cry over) BACK STREET again. Haven't seen it on TCM in years; don't think it's available on dvd either.

My hat's currently off in recognition of Miss Hayward's performances in two 1950s westerns: RAWHIDE and GARDEN OF EVIL. In both films, she plays a strong woman who more than holds her own in a cast of tough characters.

We lost black and white for one thing, and with it went mood and tone.
'I Want to Live', 'Gilda', 'The Lady from Shanghai', wonderful depictions of B-Girls or Bad Girls or Femme Fatales. Linda Forintino has come the closest in 'The Last Seduction', altho Kim Basinger in 'L.A. Confidential' sticks out as well.
And of course, most recently Natalie Portman in 'Black Swan' and Jennifer Lawrence in 'Winter's Bone' will be added to the list.
I don't know, Patti. Maybe all those afternoons of Bill Kennedy and Rita Bell have jaded us!

Ah, Susan Hayward. I never forgot her. She was bigger than life. Always. I loved her in WITH A SONG IN MY HEART. I think that's the one where she played another forgotten entertainer, Jane Froman. (Something like that.) They had to amputate her leg (Froman's not Hayward's) in that one. Very dramatic. Later in the film she meets and marries a pilot played by Rory Calhoun - my teenage crush. :)

I saw these films in the theater. Hayward need a big screen. She got lost on TV.

An actress I always liked, who is mostly forgotten now was Joan Hackett. She died young. But while she lived she was luminous on screen. She starred opposite, I think, Charlton Heston in WILL PENNY. She made quite a few films. An odd sort of beauty, an intelligent beauty.

Oh Bill Kennedy showed such great stuff. My daughter says he formed her taste forever. And maybe mine too. (Although I was a kid in Philly). Rita Bell I am a little shakier one. Was she before Bill or after?
I LOVED Joan Hackett-who also died too young. Her voice, her face, everything was sublime.
I'd even take the original Back Street.
Such a good point, she did need a big screen. I think she played briefly on a TV series near the end.
She could be as strong as Stanwyck when called upon.

Patti - Thanks for reminding me of Susan Hayward. I know they're quite different, but this post reminded me of Gene Tierney...

Portman or Lawrence as B-girls or FFs? For those roles?

Wasn't Gene gorgeous but she played everything a much more sedate level. Susan let it howl.
Couldn't get to it in time, Todd. Next week.

Patti-Bill and Rita were on both on during the same era. Those were the days when movies were chopped to hell, were bad prints and never ran the credits.

Gloria Grahame always does it for me. She was great as Dick Powell's wife in THE BAD AND THE BEAUTIFUL.

I also loved Joan Hackett in SUPPORT YOUR LOCAL SHERIFF.

Linda Fiorentino was great in THE LAST SEDUCTION. From the minute she grabs Peter Berg's dick you know he's a goner.

Tierney (who was born in Brooklyn, by the way) was indeed gorgeous. Her life story was used by Agatha Christie for the central plot of her THE MIRROR CRACK'D FROM SIDE TO SIDE, in case you didn't know it.

You could look it up.

Claire Trevor never gave a bad performance, and she could play a woman gone wrong with the best of them.

Hayward always played tough-talking dames with a passionate streak and cigarette-smoked voices. Even in "The Conquerer," where she played the wife of Genghis Khan (played by John Wayne! It's a classic!), she was very much the smoky-voiced siren. I just watched "I Want to Live" again. Even with the 1950s censorship in place, Hayward was able to communicate both Graham's rough life and her misguided generosity. I always loved her in "Valley of the Dolls," especially her ladies room showdown with Patty Duke.

As to what happened? Well, for one thing, film studios decided that "women's pictures" (as they used to be called) weren't bringing in enough money and decided to put all their eggs in the "adolescent boys/that blowed up real good" basket.

Yvette is right about Joan Hackett! Great in those troubled woman roles. She was in the remake of Diabolique with Tuesday Wald - a TV version which I thought very creepy if not quite up to the original. Hacket was perfect in THE LAST OF SHEILA as the victimized and haunted wife of Richard Benjamin. Excellent movie by the way. If I were writing Overlooked Movie posts that would be my first choice.

Claire Trevor - another powerhouse. She was the best thing in that overwrought airplane movie with John Wayne - THE HIGH & THE MIGHTY. She was kickass in BORN TO KILL, too.

How about Marie Windsor? One of my favorite noir actresses.

Are we the only one who remembers Tuesday Weld-the great Thalia Menniger. And Joan Hackett-gorgeous and throaty. Marie Windsor-not so familiar to me. Trevor was amazing.
THE LAST OF SHEILA was so much fun.

Your gifted readers beat me to Gene Tierney, but I would like to add Mary Astor to your list.

Mary Astor was simply ethereal. Especially in THE MALTESE FALCON, but virtually in every part.