"How I Came to Write This Story" Evan Lewis 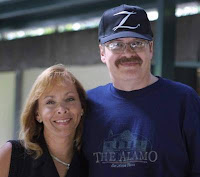 HOW I CAME TO WRITE THIS STORY: Evan Lewis

I owe it all to Bill, Arthur and Irene.

Here’s how it happened:

Cap’n Bob (aka Robert S.) Napier was riding high on the publication of his first novel, Love, Death and the Toyman, and was invited to roll down from Tacoma to make two personal appearances in Portland. As President of the Oregon chapter of his fan club, I tagged along. The first event was a panel of writers at a meeting of the Friends of Mystery, a local club headed by my old friends Ellie and Jim Rogers.

One of the six panelists was Bill Cameron, discussing the writing and publication of his first novel, Lost Dog. Of all the books featured, his was the one I wanted most to read. So I did, and it was great stuff. I especially enjoyed the way he used Portland as a setting, and told him so at the next event, a gathering of Northwest mystery writers at fabled Powell’s bookstore.

At the time, I was working on a historical adventure novel and engaging in creative avoidance by whacking out an occasional short story. These included three mysteries featuring a modern-day descendant of Davy Crockett (still unsold), two stories about Davy’s grandson in the Old West, and a tall tale starring legendary Texas hero Strap Buckner.

Lost Dog made me want to write a mystery set in Portland. As cities go, Portland has a quirky personality, rising almost to the level of a character. (Note: I have since enjoyed Bill’s subsequent books, Chasing Smoke and Day One, and look forward to the next, County Line.)

Now determined to write a mystery, I did some brainstorming to come with a suitable hero. Ideally, I figured my character should: 1) Be immediately accessible to just about anyone, 2) Have a sidekick, so I could have fun with their banter, and 3) Lend himself - or herself - to stories of any length, from flash fiction to novel.

After putting those ideas through the grinder, I reached some conclusions. Everybody knows, and just about everybody likes, Sherlock Holmes. Dr. Watson is the perfect sidekick to highlight both the human and extrahuman sides of Holmes. And Conan Doyle himself had proved that the characters worked well in tales of any length. His story “How Watson Learned the Trick,” reprinted in Sherlock Holmes: The Published Apocrypha, would today be considered flash fiction.

I liked idea of a modern Sherlock Holmes running around Portland, so I christened him Skyler Hobbs and decided he would earnestly believe himself to be the reincarnation of Holmes. Jason Wilder would be his somewhat reluctant sidekick, annoyed by the ridiculous notion that he is the reincarnation of Dr. Watson.

I now had setting and characters, but still no story. Enter my wife, Irene. (And before you ask, while she is indeed The Woman, she was not named after Irene Adler.)

As we drive each day through a funky, neo-hippy neighborhood called Ladd’s Addition, I tell her what I’m working on and what latest problem I have to solve. When I said it would be fun for Hobbs and Wilder to visit Ladd’s Addition, she said, “Why not use the house with the rabbits?”

One of Irene’s co-workers, you see, lives in that area, and her next door neighbor has rabbit hutches in his backyard. The smell, as you might imagine, is both powerful and unpleasant. Rabbits! I was hooked. And “Skyler Hobbs and the Rabbit Man” was born.

After writing the first draft, my fellow critique groupers helped me hammer it into shape. At the time, they were (in alphabetical order): Jackie Blain, Christine Finlayson, Kassandra Kelly, Becky Kjelstrom, Nancy LaPaglia, Ann Littlewood and Marilyn McFarland.

To my great surprise, Janet Hutchings and Emily Giglierano at EQMM liked the tale well enough to buy it. Hobbs and Wilder have since appeared in several other adventures, including one in the primo anthology, Discount Noir. They will soon return to EQMM in “Skyler Hobbs and the Garden Gnome Bandit.” And I’m now pounding away on a novel pitting them against a serial killer.

And I owe it all to Bill, Arthur and Irene (and quite a few others). Thanks, folks!

"Skyler Hobbs and the Rabbit Man" won the Robert L. Fish Memorial Award this year from the Mystery Writers of America.

Nice stuff. A beaut of a creation.

It takes a village to produce an award-winning story; that's my take-away from your posting, Evan. I knew from your zines in DAPA-EM that you had talent to burn! I wish you much success with your stories!

Thanks for sharing that, Evan. I'm a fan of Skyler and wish you every success with the novel. You've created a great character!

What a terrific essay! I'll be looking for you at the Edgars so I can buy you a drink on Bill's behalf!

A good lesson in how you never know where inspiration will come from, or when. And how you can't predict what will connect with readers. At least in many cases.

I really enjoyed reading about the birth of one of my favorite characters and one of the finest stories of last year.

I'm happy to have played a small part in the creation of these marvellous, memorable characters and their stories, but I had not known these details. A brilliant analytical process. Thanks for describing it.

Skyler Hobbs is just the beginning, the tip of the iceberg. I know for a fact Evan's got plenty more where that came from, and in a wonderful variety of settings, styles, and characterizations. Just keep listening to Irene...

And who is that Super Model you're standing next to, Evan?

Thanks for the kind words, everyone. Needless to say, all offers of alcohol will be glady accepted.

And that supermodel is, of course, The Woman.

That's a great picture of the two of you, and a great recounting of the genesis of Skyler and his sidekick. I've not met a Skyler Hobbs story I haven't loved, so I say the more the better!

Howdy pardner. Thanks for the thanks. You have indeed created an incredible crime solving duo in Hobbes and Wilder and I am just happy to have played some tiny part. Here's to your continued success and many more stories and novels.

Thanks for the opportunity to flap my lips, Patti. It was fun!

I really enjoyed the rabbit man story, as I may have mentioned previously, and will look forward to the book. Another former DAPA-EMmer makes good!