"HOW I CAME TO WRITE THIS STORY" Nigel Bird

INTO THIN AIR: How I Came To Write This Story.

About fifteen years ago as I was preparing to open the door to my class of five year-olds, into the room bounced a familiar face. 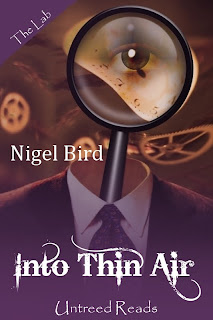 Uffe was unusual as he had been a male au pair for one of the children in my previous class. I’d last seen him and shaken his hand, offering the famous words ‘If ever you need a place to stay...’ or some such. And there he was a year later needing a place to stay. There was a slight catch in that he also had three other young, strapping Danes with him who also needed a roof for a couple of weeks. What could I say? They were student teachers who’d organised a placement, so I owed them out of professional duty as well as out of friendship for their leader.

I managed to squeeze them into my one-bedroom flat and we had a ball.

As a thank you, they bought me a ticket to Copenhagen and I was to be there for New Year.

My birthday’s on New Year’s Eve and I’d never been away from my family to celebrate it before.

The weather in Denmark was bitterly cold, minus 20 or so, colder than I’d ever seen on a thermometer before and strangely pleasant.

The hospitality of my new friends was amazing and I loved being there. On my birthday I went to dinner, we watched the Queen’s speech and let off fireworks in a drunken mess. I loved it.

I also got to spend a lot of time alone. It wasn’t just the aloneness of it all that got to me then. I was used to being by myself. What affected me was something more difficult than solitude, that something being loneliness. It was cold, bare and sad inside of me and there was nothing I could do about it.

Before our dinner party I had an idea. If we could cut chunks from the ice in the pond we could take along ice-cubes that contained fish. When the ice melted, everyone would have a fish in their drink. It seemed like a wonderful idea at the time.

We took out an electric drill, hammers and other tools and set to work.

The ice was unworkably solid like heavy stone and we gave up, so the fish thing never happened and I guess I wondered what might have been if we’d had more time.

Part two, the part that blends with the Denmark thoughts came at a time when I was heading for a fall. Everything was happening at a million miles an hour and a crash was inevitable.

One night I found an island of tranquility in a bar. I sat round a table full of friends and was lucky enough to get my seat next to a beautiful young lady upon whom I had a small crush.

Her eye-lids sparkled in the light and it was all I could do to concentrate on what we talked about.

At some point I mentioned that I needed some black nail-varnish. So did she, as it happened (nail varnish, but not black). We arranged to meet the next day to shop.

Her hangover was big and so was mine. We strolled about in the warm sunshine and eventually got the nail-paint we wanted.

Sitting at a table for coffee, she took out an apple from her bag and ate it. I was so nervous that when I realised there was no core left of the apple I had to ask. She’d eaten the whole thing, pips and all and I was reminded of my mum’s warning to me that you should never eat pips or the seeds would start to grow inside.

Later we went for cheesecake.

When we parted I felt that Danish loneliness return. The only difference was the weather.

I threw the ingredients all together and wrote Into Thin Air.

I described it as an existential romance when I pitched it to Untreed Reads, because that’s what I believe it is.

‘Into Thin Air’ is due for release in the first week of March this year.

And the lady with the apple?

She’s downstairs from me now keeping an eye on our three lovely children, the apples of my eye you might say.

Patti - Thanks for hosting Nigel.

Nigel - What a wonderful story. Your kindness had wonderful unexpected consequences!

Lovely stories. The fish thing is a perfect example of things that seem like a great idea when you're hammered.

What a great story, Nigel. Thanks for sharing it.

Excellent post and a very happy ending to it

Wonderful post, and it was so funny to read it for this Dane :D

Uffe - of course he had to be from Denmark.

Love this. Put a smile on my face.

The way all stories should end. Or pause!

It's lovely to look around and see how lucky you are. Lucky that those things happened, lucky to be posted by Patti a lucky to have you good people taking the time to leave your comments. After a weekend like the one that just passed in the world, it's great to be able to count one's blessings.
Thanks to all (and especially to Patti - wish I could send a hug downt the line).

You did, Nigel and I feel it.

it's great how the mind filetrs and retreads.

Nigel, what a wild one you were. Black nail polish! The story has the perfect end. Good one.
Anonymous-9

You must have had a good time remembering this because it just sparkles!