George Kelley will be posting the links on the 18th and Todd Mason on the 25th. I think the first week in April was going to be our homage to forgotten or neglected coffee table type books. In other words, books that are difficult to fit into your bookcase so you stick them on the table. This is merely a suggestion-all characters are welcome.

Ed Gorman is the author of TICKET TO RIDE, STRANGLEHOLD and edits (with Dave Zeltserman) ON DANGEROUS GROUND. You can find him here. 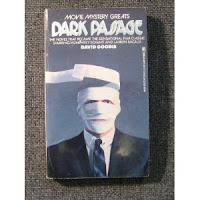 If David Goodis hadn't written this book it would have fallen to Cornell Woolrich to do the job. The set-up (and several parts of the book) are pure Woolrich.

Vincent Parry escapes San Quentin where he's serving life for a murder he didn't commit. He goes back to his old haunts in San Francisco intent on finding the real killer. But he's talked into a plastic surgery that certainly borders on science fiction. Zip zap, wait a few days and you're walking around with a completely new face. I supplement my income with The Ed Gorman Medical Drive-Through; you get a burger and fries with every procedure. But not even MY docs could do what this doc did.

Anyway despite my doubts about the medicine practiced here the book is gripping from page one to the finale. And Goodis is as good at menace and paranoia as Woolrich. His San Francisco bears a real resemblance to the London of The Ripper. There's an extended scene in the fog with a cop that starts to choke you. Will the cop figure out who he is? There are chase scenes in the fog that take on the aspect of horror fiction. And there is the ever-shifting game of whodunit.

There's the beautiful blonde stranger (Lauren Bacall in the film version) who helps him for mysterious reasons of her own; the old friend we begin to have doubts about; and the shrew (Agnes Moorehead in the movie) who is almost as much of a bitch as his dead wife--though nobody could have out-bitched her.

A very dark (in all respects) and very rich novel (parts of it read more like a mainstream book than a genre one) with an ending I'm sure Hollywood changed (I haven't seen it for some time). A page-turner and a masterful story of menace.

This was the sixth of the Kurt Wallender books by Henning Mankell. My book group elected to read it to my surprise because they don't usually op 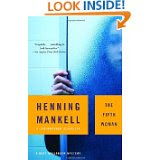 Wallender, who loses his father midway through this book and should be on a grief leave, is faced with the murder of severa; men. All die in prolonged exaggerated ways. Clearly the murderer is speaking some language that Wallender is at first unable to parse. There has to be a link.

It comes to light that these men were abusers of women, a common theme in Swedish literature. But on the way to solving the case, we get a taste of mercenaries at work in war times and in vigilantes in Sweden who have a definite Nazi cast. The Swedish police get treated as harshly as their American counterparts.

Wallender has his usual air of deep despair. My book group felt Mankell was especially apt at showing how police officers bounce ideas off each other and how teamwork solves the crime.

They felt that either Mankell or the translators wrote poorly. I didn't notice this myself.

Barry Ergang is doing a guest review this week on my blog for FFB. His review is on KILLERS ARE MY MEAT by Stephen Marlowe at http://kevintipplescorner.blogspot.com/

Dark Passage was the first Goodis I ever read... really different from his later stuff, but like Ed says, some amazingly gripping scenes. And the opening paragraph is a great example of how a book should start.

Wow two Goodis reviews on the same Friday. Lots of other good stuff too. Thanks as always.

I must admit I've forgotten the name of the Swedish actor playing Wallander in the Swedish movies MHz WorldView is still running...just to dangle those in front of you, Patti...and they're beginning to run a series from the same Swedish producers featuring Detective Irene Huss at end of the month. As MHz sells DVDs of these, I imagine they can be rented, as well...

I don't buy DVDs and I no longer belong to Netflix but maybe I will rejoin for the summer.

Every time I set out to order some Goodis I get sidetracked. I've got to get his stuff on my shelves.

I'd seen the Humphrey Bogart film, which is one of my favorites, but I never knew it was a book. Thanks for the review. Patii, I'm trying to decide if I've read this Henning Mankell book or not. My memory being what it is, who knows? I didn't think I'd like Mankell's work, but come to find out, I do. :)

It is meaty like so many of the Scandinavian books. But it reads long to me. I like short and bitter.

Let's make it the first.

Patti: I just put up one, on Highsmith.

I'm still getting your Tuesday post. I'll try in a few minutes.

Is it Mikael Persbrandt? (The Finnish joke being that "pers-" means "ass-related".)

Rolf Lassgård was the first Wallander. Could be Krister Henriksson, though. Anyway, the first Wallander novel - whatever the English title is - would probably be more to your liking, Patti. Simple yet hard-hitting plot, and reasonably short. Subsequent novels tended to be a lot fatter, and the plots would occasionally revolve around rather ridiculous conspiracies. I must admit I gave up on him around THE FIFTH WOMAN.

I did like the first two or three. You are quite right. Who is your favorite, Anders?

Patti, the 1st one - FACELESS KILLERS - is by far my favourite. I really thought we had a major new voice after that. Note that it has around half the page count as the followups.
Btw, if you are curious for Scandinavian stuff, check out Arnaldur Indridason from Iceland. But I guess you may already know about him.

Loved JAR CITY and the next one. Just gave a copy of it to my son. But I am far behind, I fear. And I am determined to read Redbreast, which I own too.

There's something off-putting about translations. I don't like being one step removed from the author.