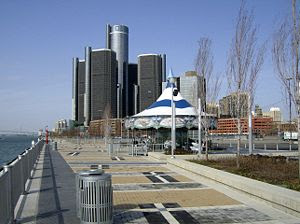 For most of the years that I've lived in Detroit, the area along the Detroit River, quite a sizable stretch of property, was severely under-utilized and still wore the look of a deserted factory district, which it once was. It seemed like however much Detroiters complained about it, no one could quite decide how to develop it.

Plans to turn the abandonded Ford Auditorium, for instance, once the home of the Detroit Symphony Orchestra, into an aquarium, like the one in Baltimore, always went awry. There were little spots of activity along the route, but it was not integrated functionally in anyway. It was very depressing to see other cities with waterfronts use the areas so creatively.

Windsor, across the water, developed their riverway in a series of small parks and sculpture gardens, but Detroit wanted a slightly different focus. One of the major concerns in Detroit is always how to bring people into the city. It seemed important to make the riverwalk more than a spot for a Sunday afternoon stroll. It needed to be a destination for many rather than a time-filler for conventioneers and nearby residents.

The dream of a riverwalk is finally becoming a reality. 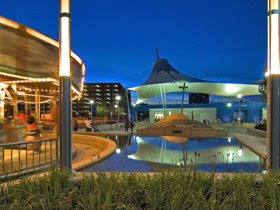 The Detroit RiverWalk is a 5½-mile promenade along the Detroit International Riverfront running from the Ambassador Bridge to Belle Isle. The path is located directly on the river, sometimes bridging it. The path is 62 feet (18¾ meters) wide in most places, with separate lanes for pedestrian and wheeled traffic. Pavilions, fishing piers and benches are located at intervals along the path.

The first 3.5 miles (5.6 km) of continuous RiverWalk and two of the four planned pavilions opened to the public on June 6, 2007. Rivard Plaza located at the foot of Rivard Street features a covered seating, a carousel, conecessions and bike rentals. Richard Plaza located in Gabriel Richard Park features covered seating, conessions and a butterfly garden. The west RiverWalk development is not expected to be completed before 2012. It will eventually connect to River Rouge in the southwest side. There is also a spoke, the Dequindre cut, which will take the walkway north soon.

It's nice to see some life slowly coming back to the city of Detroit. Detroit desperately needs a better tax base-- and something like the Kalamazoo promise! This is a start, though.

Riverwalk is absolutely gorgeous! And it looks so peaceful. I hope you enjoy it often.

It looks lovely!! We are going through similar regeneration and I have the same topic as you for MTM!!!

Except yours is prettier!!

Funny how old industrial cities, like Detroit and Cleveland have taken so long to realize that their waterfronts are such wonderful assets!
It look like a beautiful place.

Beautiful riverwalk of Detroit. There are all those places to stop and browse, and eat.

These industrial cities saw water as a place to dump for a long time, I fear. Fingers crossed that those restaurants can make it in these times.

Love it when cities make good use of areas like Detroit's Riverwalk! I'd forgotten about some of Toronto's scuzzier scenery until I was back this summer.

Yeah, it just takes a long time for cities more financially strapped. Like Detroit and Cleveland.

Very nice. Glad to see their are moving forward on the project.

It looks like a great place to visit. I've been there once - for a road rally race? I think? I know it involved fast cars. I should revisit for a new look.

I worked for Parke-Davis back in the 70's. My last two years there, I occupied the office on the second floor of the administration building which appears in your picture. Third window from the entrance. I used to watch freighters dock in front of the building and unload a boat load of hog pituitary glands which we froze with liquid nitrogen and then literally broke off the anterior lobe from the rest which we then used as a thyroid remedy.

The river walk has certainly come a long way from the days when boats loads on room temperature hog pituitary glans were unloaded.

I will save my stories of working on the "flats" in Cleveland and the river catching on fire for another day.

A shame that between the busy riverfront of the mid-century and now, there was such a long period of...nothing.

It's great to see the riverwalk finally getting developed. From the photos, it looks lovely.