Karen G. Anderson is a Seattle-based blogger and web content writer. She's a member of the National Book Critics Circle and was a reviewer for the 2008 Amazon Breakthrough Novel Contest.

Let me start by staking out the territory: I'm a fan of the crime fiction of K.C. Constantine, John D. MacDonald, and Archer Mayor. These authors convey a powerful sense of character and setting; oh, their stories are skillful enough, but for years after I close one of their books I'm haunted by the people I've met and the places I've gone with them.

I was thrilled to come across the work of Joe Hensley. An Indiana attorney, judge, and politician, he created a series with a protagonist with a similar resume. Hensley's Don Robak series spans four decades, and includes the memorable Robak in Black (St. Martin's Minotaur, 2002).

Hensley, who died last year, started his writing career in 1960 with the paperback The Color of Hate (Ace, 1960). I mention that because, though he launched the Robak series (with Deliver Us to Evil) in 1971, his writing always carries with it more than a whiff of the mid-century pulps. His men are tough, self-reliant, and quick to anger. His women are either angels (Robak's beautiful, and tragically injured, wife) or bitches.

As the social turbulence of the 1960s moved inland from the coasts to Indiana, Hensley, through Robak, painted a deeply moving portrait of a man raised in a traditional American culture coming to grips with a new one in which a black man could become a close friend and neighbors could become gun-toting cult members.

While Hensley's use of language is often inelegant (as perhaps suits the blunt Robak character) his narrative style is rich and compelling. Robak in Black opens with Judge Robak's wife, Jo, in the hospital. She's delirious and possibly near death from a illness that has the doctors baffled. Robak is furious to discover that her test samples have vanished, along with a hospital employee. Because he's involved in some highly controversial legal cases, Robak immediately suspects that Jo has been poisoned as revenge, or as a threat. He has reason to be suspicious: a murderer he'd put away for 50 years has just been pardoned; a local religious cult is up in arms because Robak sentenced one of its members to death for child murder; and he's about to hear a major lawsuit against the town's largest employer.

The situation soon becomes chilling. Robak discovers that the local law enforcement and medical authorities are afraid to investigate -- possibly because the corrupt county commissioners are campaigning to defeat Robak in the upcoming judicial elections.

Robak grudgingly enlists the help of three friends who've assisted him in previous cases: an eccentric retired bailiff, a tough-as-nails court reporter, and a charismatic black gospel preacher with a streak of pureevil. Hensley draws this colorful trio brilliantly, and doesn't stint on confrontations with the bad guys --or with the arrogant local FBI agent, who orders Robak out of his way so he can go after the religious cult on his own.

Hensley puts some fascinating characters on stage in this book, and then unleashes a rip-roaring plot that gives them plenty of opportunity for skullduggery, shoot-outs, and chewing of scenery. For aficionados of fast-paced, hardboiled crime fiction, Robak in Black is simply delicious.


Kathryn Miller Haines is the author of THE WINTER OF HER DISCONTENT and THE WAR AGAINST MISS WINTER, a series set in 1940s New York. 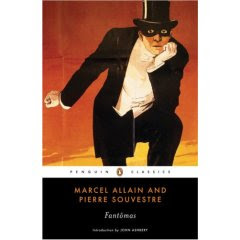 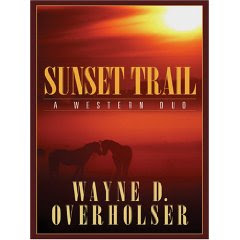 I don't know why the popular perception says Westerns are a shrinking reader niche. I guess it has something to do with what we grew up knowing. I recall liking as a kid the TV Westerns like THE HIGH CHAPPARAL, THE VIRGINIAN, THE LAWMAN, DEATH VALLEY DAYS (Mr. Reagan as host) and to nail down the point, GUNSMOKE. Thankfully a part of us never grows up. For me, Westerns make for an occasional foray in my reading habits.

Wayne D. Overhosler (1906-1996) was a prolific writer and won the Spur Award three times. He lived and wrote about Colorado. SUNSET TRAIL offers two novellas bundled into one book. SUNSET TRAIL (really a long short story) originally appeared in 1947 in Frontier Stories. It involves a wagon train leaving Independence, MO in 1846 headed for Santa Fe. Bruce Shane is hired to guide it through Indian territory, and the bad guys are suspected of shipping contraband rifles aboard the wagons. This yarn ended a little abruptly for me, and the dialogue as dialect was a bit distracting. But this remains a well-told, entertaining yarn.

The novella TWELVE HOURS UNTIL NOON is the real appeal. It takes place in Amity, Colorado, following the Panic of 1893. Matt Dugan, the local banker, brings in Governor Wyatt to speak at the celebration of a local dam project. Jean, Matt's daughter, is engaged to Sheriff Jerry Corrigan. The bad guys hired by the Governor's enemies plot to assassinate him in Amity while speaking at the podium.

TWELVE HOURS demonstrates Overholser's considerable skill at pacing, setting, and characterization. Overholser likes to use history. The plot is nothing new (I almost envisioned the building climax in HIGH NOON), but I actually stayed up late enjoying TWELVE HOURS.


Rafe McGregor is the author of the forthcoming THE ARCHITECT OF MURDER.

The Mournful Demeanour of Lieutenant Boruvka by Josef Škvorecký

“Mournful Demeanour” – what a title, if only I’d thought of that first...Josef Škvorecký is a contemporary Czech writer and publisher who spent two years as a slave labourer to the Nazis in the Second World War, and fled to Canada following the Soviet invasion of his country in 1968. He is best known for his numerous literary works, but The Mournful Demeanour is the first of a trilogy of books with the melancholy Lieutenant Boruvka as the protagonist. It was followed by The End of Lieutenant Boruvka in 1975, and The Return of Lieutenant Boruvka in 1981. At the time of writing, the latter – set in Canada – is the only one still in print, along with a short story collection entitled Sins for Father Knox (1988), which features Boruvka in two of the ten tales. The Mournful Demeanour was first published in Czechoslovakia in 1966 and first translated into English in 1973. It contains twelve short stories which are fiendishly clever mysteries and offer a fascinating insight into Communist Czechoslovakia prior to the Soviet invasion.
Boruvka is an officer in the Prague police, a kind-hearted family man who shares his creator’s love for jazz music. The first tale, The Supernatural Powers of Lieutenant Boruvka, is one of the best short stories I’ve ever read in any genre. There are plenty of other outstanding offerings in the volume, and Škvorecký has a particular talent for complementing his fine stories with unusual and interesting titles: Death on Needlepoint, Aristotelian Logic, and Crime in a Girls’ High School to name but three. Don’t be fooled into thinking these are cosy mysteries, however. As one might expect from an author who suffered so much himself, there is a very grim edge to the anthology, albeit it tempered by the great depth of feeling Boruvka conceals behind his world-weary, soft-spoken mien. The collection is almost unique in my experience in that it contains some ingenious plotting and puzzles, as well as many of the qualities for which literary – as opposed to popular – fiction is so frequently praised. Enthralling and bittersweet at the same time.

Fantomas sounds intriguing. Thanks for bringing it up.

And try Ms.Haines. I met her at a book fair and she was charming. I bet her books are too.