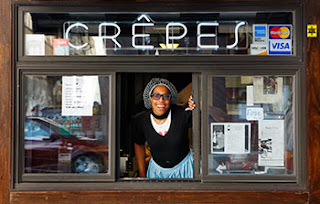 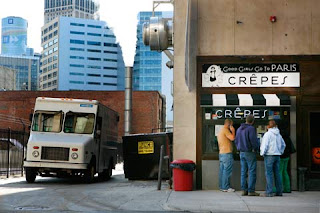 At her crepe stand, Good Girls Go to Paris Crepes, for about five bucks, Tonya Blanchard and her merry band of crepe-makers will create you one of her 20 delectable crepes, hot off the griddle, made in a space barely big enough for two to stand, let alone cook.The 48-square feet space is small. A gas line, prep cooler and sink were installed. So far, business has been good. "I've been pleasantly surprised," she says. "And I haven't had to dress up as a crepe and walk up and down Woodward to get people to come here!"For the 30-year-old, born and bred Detroiter, opening anywhere but in the city proper was not an option. "Yes, it would have succeeded instantly in Ferndale or Royal Oak, but that's not the point," says Blanchard. "This is a French city, and I think we need to be known for crepes."For Detroiters not familiar with the French treat, Good Girls' menu provides a primer. On the Right – or sweet – Bank, there's the simple Seine, with butter and sugar (Blanchard's daily breakfast, she admits) and the tart Melinda, with lime and brown sugar. The Snyder is a mélange of fruits, and the Katie re-creates an apple pie.To Blanchard's pleasant surprise, a full half of the crepes she sells hail from the Left – or savory – Bank of her menu. The most-popular Allison combines hummus, hot sauce, spinach and herbes de Provence cheese, while the Rose is a simple blend of mozzarella, tomato and basil drizzled with balsamic vinaigrette.Aside from crepes, she sells fair trade organic coffee for a buck a cup, and that's about it. She does plan to complicate things a bit by adding an enclosed patio for the coming colder temperatures. Plus, Etienne will make the move to Eastern Market's Shed 2 when Blanchard gets a double griddle for her John R spot. Yes, she'll be busy, but she wouldn't have it any other way. "It's nice to be a little uncomfortable," she says.Now that Blanchard has taken the plunge into entrepreneurship, she says there's no turning back. "You have to ask yourself, 'Who am I living for?'" she says. She acknowledges that "a bi-weekly check or a sense of security" may be missed, but says, "You're only young once, might as well see how it works!"Blanchard encourages anyone thinking about opening a business to go for it: "The hardest part of opening a business – it's not the money – is taking a leap of faith."
http://www.youtube.com/watch?v=SVaG716rwdw.

This story comes courtesy of Model D. Check out Travis Erwin for more My Town Monday.
Posted by pattinase (abbott) at 11:00 PM

I could just eat a crepe now!! I wish her sucess it looks like a great place and the scene reminds me of all the American shows we see on the TV!!

Good for her! If I make it to Detroit, I'll come by and get a crepe!

I hope to get there myself!

Cool. I actually like crepes after trying some at the Paris Casino in Vegas.

Businesses like these are the heart and soul of a community. Good for all of us!

Mmmm, crepes! Now I have to go make some. I had to learn to make them, because the restaurant in town is a bit pricey to go to very often.

I bought one in the seventies. Think I used it about twice.

I bring The Kid to Genki Crepes, before we hit Green Apple Books. Because children should know the finer things in life, like a Nutella banana crepe and a good used book.

Oh, Nutella! It's been too long.