The House Across the Street 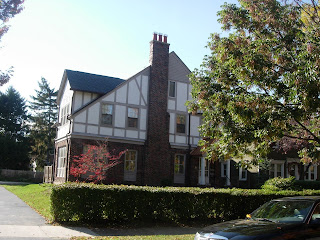 Sometimes it's a house that makes me want to write a story. This house is across the street from my much more modest abode and right next door to a house with two kids in it.
The place is actually divided into four apartments. There are four mailboxes, four garages and a huge driveway.
We have lived here, on this suburban street outside Detroit, for 10 years. In those years, no one has ever lived in this house. Or at least no one we can see. The house is kept up meticulously. New windows a few years ago, new garages, painted recently. This year a new roof.
They could have sold it during the boom and made a tidy profit. Now, not so much.
What's the story with this house? What would your plot look like?
Posted by pattinase (abbott) at 9:57 AM

One of the houses McCain forgot he owned?

I see a Margery Allingham or Ngaio Marsh old fashion murder plot from the 1940s. The butler did it but he may have had help.

But why still empty ten years later? And no attempt to sell it.

The house is owned by an international assassin who stops there between assignments.

This has reminded me of two things. First, in London especially, there were a lot of large house (which might have been home to wealthy family and their servants -- as in Upstairs Downstairs). When no-one could afford this arrangement any more, the house was converted into flats (often one apartment per floor, sometimes more). So perhaps this house is a conversion.
There would also have been lots of rules about how much rent one could charge; I think these have largely been relaxed now.
Which brings me to the second point, which I shall start with a link, if I may:
www.urban75.org/london/centrepoint.htm
which leads to:
www.brookes.ac.uk/schools/rem/london/thumb_pages/centre_point.html
(I don't know what Brookes is, but ac.uk is for educational establishments, like your .edu.)
A short extract: "Centre Point became notorious because it remained empty for years. The economics of this was that, as rents were rising so sharply, it was better to leave it empty than rent it out and tie its value down to a particular rent review period. This was because the capital appreciation was greater than the lost rental income. It's construction cost in 1964 was £5.5 million whilst its estimated market value in 1973 was £20 million. The icing on the cake was that as it was empty it was not liable for rates." (rates equals property tax). I think it was still empty when I arrived in the UK, and very controversial because there was, as always, a housing shortage.
So, maybe the owners thought the house was worth more empty; I can imagine that an empty house needs at least as much maintenance as an occupied in order not to be dilapidated.

The second link has been truncated -- it ends with
thumb_pages/centre_point.htm

I like Stephen'e idea but I think Pierre nailed it. It makes complete sense. Too bad though I could use the room.

I have a 'Silent Hill' moment here.
It's not that the house is empty but in another time - a time that runs in parallel with our world.
In November the various residents will celebrate Thanksgiving and the house will be bedecked for Christmas. There will be a tree in the window.
Quietly, in the dead of night, a man will enter the house and stand by the window. He knows that the tree is there and he will place two presents beneath that tree.
He will step back and glance towards the open kitchen door because he knows his wife and daughter are standing there. He wishes them a 'Merry Christmas' and he knows that they are smiling at him and wishing the same back to him.
As he leaves, he glances back to the window and knows that they are watching him.
One day, he believes, his wife and child will join him once more. Return from that place where they disappeared 10 years before.

Oh, good one. I love those kind of tales. Like The Third Level by Jack Finney. I'll be on the lookout for a Christmas tree in the window.

A local safe house for the FBI or a different and more nefarious organization.

A secret trysting location for the ultra wealthy.

There's a little traffic going in and out of there. But not much. I'm gonna keep a better eye on it though.

Perhaps it's the season but I see a young adult mystery story on Halloween night. Four youngsters, none older than 12, three boys and one girl. It's Halloween night and they are all dressed up as their favorite characters. The youngest boy, aged 11, is an avid reader of mysteries (Hardy Boys, new stuff) and has an active imagination. The late-night activity he's seen in recent days at this supposedly empty house has convinced him that something is afoot. He convinces his three friends to walk by the house on Halloween just to see what's what. Since no one walks past that house, the bad guys don't always have to be quiet. As the four friends look at the darkened house, they see a flash of a match then the wavering light of a candle. They watch as the light moves from the first floor to the second floor. Ducking behind the hedge on the street side, the friends see a figure silhouetted against the curtains on the second floor window. Then, the girl sees another figure sneaking behind the house. A few seconds later, the silhouetted figure turns quickly as if he heard something downstairs. The light is extinguished. The friends hear a cry and a bump. They look around the street. No one is out. They are alone. In the moonlight, they can see the fear in each other's eyes. But the mystery reader wants to know more. He stands and rushes to the edge of the house. Peering into the front window. The other three, still hunkering down behind the hedge, hear their friend gasp. From the end of the street, headlights pierce the darkness. The car is approaching...

That's much better than my best guess which was some elaborate money-laundering scheme.

Nah, not better, just different. That's the beauty of many authors writing on the same picture (or quote). I really like the idea you presented with the common opening of the flash fiction exercise. I'd have done it but I'm quite focused on completing my second novel by Thanksgiving. I hope you do it again so I can submit something.

Actually, you know what? Why don't you do another fiction exercise with the photo as the jumping off point?