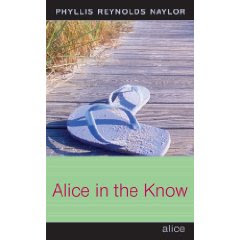 Several weeks ago, Karen Olson, at First Offenders asked if some of her readers might like to read a book that various groups had tried to ban at libraries in recent years and talk about it during "banned books week."

I chose a book from the Alice series by Phyllis Reynolds Naylor, Alice in the Know. This book looks at a lot of controversial and difficult issues: teen sex, what constitutes rape, Internet hi-jinks, racism, shop-lifting, cancer in children, etc, but all of it is handled in a responsible way. I was not the least bit offended. If talking about these issues is offensive to some people, they should not be allowed to make judgments for the rest of us.

What did surprise, or even shock me, about the book was how rooted in these issues it was. Issues became the plot. Scarcely a page was devoid of controversy and adversity for Alice and her pals and family.

If the average teenager leads a life that is this difficult and issue-laden, I feel sorry for them. If I led such a life, I am not sure I'd want to read a book like this one. I think I'd prefer a book where some good times were had. One issue per book might be a good rule. So LIGHTEN UP.
I hope that Naylor's earlier books in this series, written for younger children, are not so bleak. Karen Olson says they are lighter in tone.

I'm sorry to be somewhat critical of this book when I set out to uphold its right to be in a library. It certainly has a right to be in every library. The rest is secondary to that issue. Patti Abbott

Kathy Fannon is a librarian and events coordinator at Romeo Public Library in Michigan. Romeo is the town everyone wishes was theirs. Find Kathy Fannon at : http://thelibraryfairy.blogspot.com/

I read Chris Crutcher’s Athletic Shorts. 6 short stories published in 1991 that have won the School Library Journal Best Book of the Year Award as well as the American Library Association’s Best Book for Young Adults Award.

The book has been banned for homosexuality and offensive language. It has been on the Top Ten List of Banned Books for the past 10 years. Yes, the book uses language that is normally considered offensive. But it is also the language you hear everyday in the hallways of almost every high school in this country. That’s why kids like the book-it’s real;
real stuff that happens to real people, just like them. Chris Crutcher gets that. He has coached high school teams. He has and still is, I believe, counseling troubled teen-agers so he knows what he’s talking about. Teen readers respect that.
What I liked about the stories is that each one had a moment that offered hope or redemption to at least one of the characters. And it’s done so well, some kids may not even notice. Kids can see that over done story and won’t read it or tell their friends about it. In Athletic Shorts, they just might see themselves.

Yes, we need to make sure what our kids read has some kind of value-even if it is just entertainment value. But is also our job as parents, educators, librarians, and citizens to have free access. If we don’t want our kids reading something, then it is our responsibility to monitor said kid and also to teach them to make those decisions. Reading is such an individual occupation that what I like, you may not and vice versa.
However, it is not my responsibility to tell you what you can or cannot read. It should not be up to one individual to decide whether a book is acceptable to a whole community. So we have Banned Books Week to remind us of that.


Here are a few more banned books sites and reviews:

Thanks for bringing attention to our right to read freely!

And thanks for being part of it!

Patti, my link is not to my post on banned books.