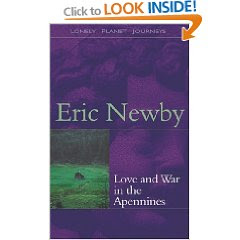 Chris Ewan is the author of the forthcoming THE GOOD THIEF’S GUIDE TO PARIS, the second title in the Good Thief series, which began with AMSTERDAM.


Love and War in the Apennines by Eric Newby

Eric Newby’s brilliant fictional memoir, Love and War in the Apennines, is the standout title from a classy collection of travel fiction. It tells the story of Newby’s war years, opening with his capture as part of a doomed Special Boat Section mission off the east coast of Sicily and touching on his internment in a prison camp close to Parma.
If that sounds like the ingredients for a bleak tale, rest assured that this whimsical story is anything but. Part of that has to do with Newby’s gentle humour – at times he comes across as a P.G. Wodehouse character - but two things really set his tale apart.
The first is that following the Italian Armistice in 1943, Newby and his fellow prisoners evaded the advancing Germans and took shelter in the mountains and countryside south of the River Po. Here, Newby was hidden, cared for and fed by a motley network of local peasants and farmers, passed from one precarious location to the next, eventually ending up in a mountain cave.
His saviours come vividly to life, described with real affection and wit, as do the high mountain peaks, the simple Italian food, the colourful morning skies and all that other good stuff that comes from a neat piece of travel writing.
But what really tugs at the heart is the developing romance between Newby and a local girl called Wanda. Communicating in pigeon English and Italian, chaperoned by nuns, separated by mountain passes and the dangers of the war, they fall swiftly in love, destined to spend the rest of their lives together.
It’s sentimental, sure, and Newby is the first to admit that the lines between fact and fiction are more than a little blurred. But even so, it’s strangely poignant to read of how cut-off Newby became from any larger knowledge of the conflict raging all around him, and I defy anyone to read the epilogue, set some twelve years after the end of Newby’s ordeal, without
a lump in the throat.
Andrew Pyper is the author of the newly released THE KILLING CIRCLE and THE WILDFIRE SEASON.

HOW INSENSITIVE, by Russell Smith (Porcupine's Quill, 1994).
Perhaps this novel isn't so much forgotten as merely Canadian. As with most books published north of the 49, How Insensitive had little life beyond its originating borders. Too bad. Not only because it's author is a friend of mine (full disclosure), but far more importantly, because it's a sharp, funny, social satire of its place and time (that is, Toronto in the early '90s). In this case, the "place and time" part are especially crucial for me, as it marks where I was as a writer starting out. And How Insensitive is all about Starting Out as a Writer in the Big City.
Canadians aren't known for their literary satires. Now that I think of it, we aren't known for our sense of humour either (at least not in our literary fiction). But How Insensitive is a scathing satire of 90s-style hipsterism and media wannabe-quests. And there's some set pieces here that are true gut busters. For a book published by a (very) small press, it caused quite a stir at the time of its publication. People actually bought it, actually read it. People under forty years old! It was a mini-scandal in the drier precincts of Canadian literary guardianship. But that's part of what made - what still makes - How Insensitive so much fun.

Love and War in the Apennines by Eric Newby was outstanding!!! Thought I was the only person on the planet who had read it!

Josephine, I'm glad to hear there are two of us...

My only Newby Experience was The Big Red Train Ride. I'll have to try this one.

If memory serves, Newby was a fellow prisoner of war in Italy with that great crime writer Michael Gilbert.

Oh, I read a lot of Michael Gilbert in the seventies.

I didn't know that, Martin. I'll have to try some Gilbert

I haven't double checked this, but I think Gilbert and Newby were both prisoners of war in Italy. Gilbert wrote an excellent thriller based on his experience called Death in Captivity, which was filmed effectively by Don Chaffey as Danger Within. His legal mysteries are outstanding, as are some of his police novels.