SOME GREAT NEWS TO ANNOUNCE!!! 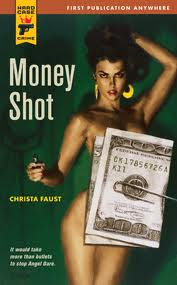 From the desk of Charles Ardai--
We've got some big news to announce today: After a year's hiatus, Hard Case Crime will be returning to bookstores with new titles in 2011, thanks to a deal we just signed with UK-based Titan Publishing.
Titan is a publisher both of fiction and of gorgeous art books focusing on pop culture such as movie poster art, pin-ups, newspaper comic strips, and Golden Age comic books, and has worked with filmmakers such as J.J. Abrams, Joss Whedon, and George Lucas.

Titan has been around for 30 years, has more than 200 employees, and in addition to publishing books also has a magazine division, a retail division (Titan owns the famous Forbidden Planet bookstore in London, and until recently co-owned the Murder One mystery bookstore with Maxim Jakubowski), and a merchandise division that produces items such as t-shirts, sculptures, and accessories. We look forward to exploring ways we might develop some cool Hard Case Crime products with them!
But first things first: books.
Hard Case Crime will relaunch in September/October 2011 with four new books, including CHOKE HOLD by Christa Faust (sequel to her Edgar Award-nominated MONEY SHOT), QUARRY'S EX by Max Allan Collins (the latest in the popular series of hit man novels by the author of "Road to Perdition"), and two never-before-published novels by MWA Grand Masters (names to be announced shortly).
Additionally, Titan Publishing plans to acquire all existing stock of Hard Case Crime's backlist from Dorchester Publishing and to resume shipping these titles to booksellers immediately.
New books will be published in paperback (possibly some in hardcover as well!); ebook editions will also be released across multiple platforms. Titan is distributed in the U.S. and Canada by Random House.

We're very excited about working with Titan (indeed, we had offers from five publishers and chose Titan over several that were much larger and better-known) -- they love pulp fiction as much as we do and appreciate that in books like ours the visual dimension is just as important as the storytelling. It's hard to imagine a better home for Hard Case Crime.

This is great news! I, for one, would like to see some HARD CASE hardcovers. And, it will be a relief to have the HARD CASE backlist available again in bookstores. But, I think the future growth of HARD CASE might be in the ebook market.

The covers are so important to this line. I have quite a few and looking at the covers is my favorite part of it--not that the books aren't great.
But those covers....

This is great news. I am happy Mr. Ardai can continue his salute to the old pulp paperback format, while those of us who have run out of room and turned to e-books will get to enjoy the great stories and writers as well. I do hope the e-book versions will include the cover. I am picturing the Hard Case covers on my 27 inch Mac screen.

pattinase, I read where your venture into e-books has been held up at the printer. I know the image of just downloading words and you have an e-book is too simple in this real world. How does a book get e-published? What differences are there between print and e-publishing? How does cost compare? Why don't more publishers do both at same time so to increase customer base?

The final editing was delayed a few days but it should be out by the 22nd. I know very little about the questions you ask because an agent handled it all for us. Thank God. The work is certainly less for a publisher with an ebook and they get less of the profits. It is certainly faster because the average turn around for a print book now is around 18 months with the big presses and with an ebook just a few months. Beyond that, I am pretty much in the dark. Well, in a sense many publisher do do both in that most books now are available on Kindle and such. Thanks for stopping by Michael.

Very welcome news. I love those covers, too, and like George, I would love to see them on dust jackets for hardbound books.

michael said...
This comment has been removed by the author.
2:45 PM

Thank you for sharing your experiences.

Unknown said...
This comment has been removed by a blog administrator.
5:39 PM