Tom Llewellyn, author of THE TILTING HOUSE, grew up in a drafty, old house (without tilting floors) on the shores of the Puget Sound. One winter, the house got so cold that the water in the toilet actually froze. Tom studied creative writing at the University of Washington in Seattle. He has worked as a trade journalist and copywriter, and is the cofounder of the guerrilla art project, Beautiful Angle. Tom lives with his wife and four rambunctious children in a Victorian-era home (with tilting floors) in Tacoma, Washington, the city which provides the setting for The Tilting House, his debut novel from Tricycle Press, an imprint of Random House.

ore information about the author and the book, visit TheTiltingHouse.com.

As a first-time children’s novelist myself, I have an obsession with the first books of successful kid-book writers. Louis Sacchar’s “Sideways Stories from Wayside School,” came out years before “Holes” topped bestseller lists, Roald Dahl’s “The Gremlims” was published years before Charlie found his chocolate factory, and Sid Fleischman’s “Mr. Mysterious and Company,” introduced him years before he won the Newberry Medal for “The Whipping Boy.”

I first read “Mr. Mysterious and Company” when I was about 10 years old—35 years ago. It fascinated me. It’s about a pioneer family, traveling in their covered wagon on the way to a new and possibly better life in distant California. But theirs was no ordinary wagon. Read Fleischman’s description of it here:

It was a most remarkable sight. Even the hawks and buzzards sleeping in the blue Texas sky awoke in midair to glance down in wonder.

A covered wagon was lurching west along the barren trail to Cactus City, but it was like no other wagon seen in those parts before. To begin with, it was the wrong color. Its canvas was bright red and could be seen for miles. The wheels were painted gold, like a circus wagon, and the horses (if seeing was believing) were as white as swans.

The man driving this most remarkable wagon and these white horses was himself a most remarkable man. He wore a stovepipe hat, as tall as Abe Lincoln's and just as black, and had a smiling red beard even sharper than the letter V. If the hawks and buzzards could have read, they would have seen his name in golden letters a foot high on the sides of the wagon: MR. MYSTERIOUS & COMPANY

Mr. Mysterious (aka Andrew Perkins Hackett) is a traveling magician. He’s taking his wife and three children, Anne, Paul and Jane, out west to live on a farm and go to school. Anne, the oldest, is looking forward to a more stable life. But Paul and Jane long for the magic show to continue. Why wouldn’t they? In the show, they get to see Jane float through the air. They can watch the head in the box move its lips and talk (that's Paul behind the whiskers). They get to help Mr. Mysterious--Pa himself--make a cow lay an egg and a chicken give milk.

Along the way, they run into adventures galore, including showdowns with the notorious Badlands Kid. The Kid is armed with six-shooters. The family’s only defense is a wagon full of magic tricks. Who will win? Will the family survive long enough to reach California? And what will happen to the magic show once they get there?

Fleischman does a fantastic job of combining the adventures of frontier life with the mystifying trickery of a magic show. The author comes by his knowledge honestly. Before writing books, he worked for years sawing ladies in half as a vaudeville circuit magician.

Because of Fleischman’s continuing popularity, the book came back into print a few years ago, so it’s easy to find. I still have that original copy and I read it to my own kids recently to find out how it held up. They loved it. You will, too.

Ed Gorman is the author of STRANGLEHOLD, A TICKET TO RIDE and many other fine novels. You can find him here.

HIS NAME WAS DEATH by Fredric Brown

After the big war American lives were in flux. Millions trekked to the suburbs to begin an entirely new way of life. And many of the prohibitions that had been common before the war were now relaxed.
Kurt Von 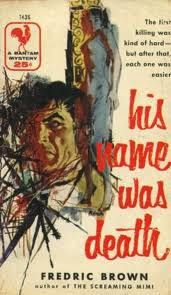 negut once remarked that the novels of John D. MacDonald charted the Fifties and early Sixties so well that students of sociology would be able to read them decades later and get a true feel for the era.
I feel the same thing is true of several of Fredric Brown’s novels, including His Name Was Death, a novel so cunningly crafted that Anthony Boucher in the New York Times said on publication, “You’ll be compelled to read through in one sitting to one of the very few endings that have genuinely surprised me in a long time.”
In addition to the stunning story there’s also Brown’s take on mid-Fifties. His mid-Fifties. While suburban mysteries came into fashion Brown frequently wrote about life in small cities, in this case a Midwestern burg where a series of murders has baffled police and terrified the citizenry. The city resembles aspects of Brown’s Milwaukee. The characters likely resemble the people he knew in his earlier life.
Fredric William Brown was born into the working class, educated in public schools and night school as well as a year at college. Brown spent nearly twelve years working as an office worker during the Depression. From there he became a proofreader at the Milwuakee Journal. Given his penchant for drinking and his fondness for bars, Brown certainly encountered the types—if not the actual people—he uses in His Name Was Death.
The prototype for Darius Conn, small-time businessman, might well have been one of Brown’s drinking buddies. Successful but not as much as he lets on; likes his nights out with the boys because frankly his marriage has gone stale; and talks a lot about the same kind of dreams heavy drinkers always talk about.
That’s the façade Conn presents anyway. In truth he murdered his wife over a year ago. The police accepted it as an accident. And his plan for becoming an important businessman is being financed by his turning his printing business into a forgery operation.
But then one afternoon the fetching Joyce Dugan, his trusted Girl Friday, talks to a man who stops in to see Conn so he can pick up some money Conn owes him. Dugan calls around and finally locates Conn who tells her, yes, use the desk fund to pay him. And then have a nice weekend. Well, turns out the desk fund doesn’t have enough so she opens the safe and takes the extra money from there. Not knowing of course that it’s counterfeit.
Brown was clearly one of those writers who enjoyed amusing himself. This story could have been told in a straight-forward fashion but it wouldn’t have near the power it does. Brown tells his tale from nine different points of view. And with a dark chuckle up his sleeve, he shows how each one of them meets his or her fate because of Joyce Dugan giving the man (an old high school boy friend, as it turns out; and a far more preferable mate than the bullying gambler she married) just a few counterfeit bills. A remarkable narrative structure that Brown used at lest twice again.
In true page-turner fashion, Brown sets up his story in an intricate set of inter-locking cliff hangers. His depictions of raw fear, terror, rage, betrayl are played off against moments of black humor and even sweet romance.
This is one of Brown’s true crowd-pleasers and should have been one of his biggest sellers. But Brown, who was often referred to as a “writer’s writer,” was never a big seller. I once talked to the man who’d been the sales manager of Bantam Books during the Fifties. His favorite writer bar none was Fred Brown. He said he did everything he could to break him out but it never happened.
So I go back to my thesis at the top. Brown did the realistic every day of the working class so well it may have limited his appeal. The time was dominated by private detectives and the romance of the mean streets. Brown’s streets were mean all right but they were filled with many of life’s losers, the kind of in-laws most of us dread having. Philip Marlowe was handsome, brave and witty. Brown’s good guys were sixty dollar a week salesmen whose ambition was to move out of their sleeping rooms into real apartments. Getting laid in a sleeping room ain’t easy.
But time has been kind to the best of Fredric Brown’s novels and stories. He has yet to develop the cult he deserves but at least his name and discussions of his work are appearing with more and more frequency on websites of film and noir.
And what you should read is one of the finest crime novel the Fifties, a decade rich with many true masterpieces.

I like Frederick Brown. Didn't know about "His name was death."

I love Sid Fleischman's books for kids, but I also really like his Gold Medal books as A. S. Fleischman, some of which I've used as Forgotten Books.

This week I am running Barry Ergang's review of Small Game by John Blades. Barry has contributed a number of reviews in the past to my blog and I am hopeful he will do so again.

I have a FFB for The Rainbow Cadenza by J. Neil Schulman up for when you do the recap.

That Frederick Brown book sounds like my sort of thing. I'd never heard of him until a couple of years ago, via Cullen Gallagher.