Ed Gorman is the author of STRANGLEHOLD and the forthecoming anthology, BY HOOK OR BY CROOK. He also has a story in DISCOUNT NOIR. You can find him here. 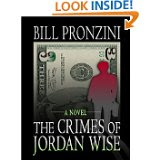 ebody who doesn’t have the personality to be an accountant. If you watch many true crime shows, you see a lot of Jordan Wises. People who fall into crime through circumstance rather than those who go looking for it. Jordan becomes a criminal only after meeting Annalise, a troubled and very attractive young woman who needs two things badly – sex and money. But in order to get the sex on a regular basis, Jordan must first provide the money. He embezzles a half million dollars and flees with Annalise to the Virgin Islands. In this first part of the novel, there’s nice James M. Cainian detail about how Jordan comes alive for the first time in his life. Some of this is due, whether he admits it or not, to the danger of committing a serious crime. But most of it is due to Annalise and his profound sexual awakening. The central section of the book reminds me of one of Maugham’s great South Seas tales – lust, betrayal, shame played out against vast natural beauty and a native society that, thanks to an old sea man named Bone, that Jordan comes to see value in – even if Annalise, her head filled with dreams of Paris and glamor, does not. Old Maugham got one thing right for sure – as Pronzini demonstrates here – a good share of humanity, wherever you find them, are both treacherous and more than slightly insane. There are amazing sections of writing about sea craft and sailing that remind me not of old Travis McGee but of the profoundly more troubled and desperate men of Charles Williams who find purity and peace only in the great and epic truths of the sea. That they may be as crazed and treacherous as everybody else does not seem to bother them unduly. There are also amazing sections (almost diaristic sections) where Jordan tells of us his fears and desires, his failings and his dreams. In places he deals vividly, painfully with his secret terror of not being enough of a man in any sense to hold Annalise. The publisher calls this a novel and so it is. Pronzini brings great original width and breadth to the telling of this dark adventure that is both physical and spiritual. He has never written a better novel, the prose here literary in the best sense, lucid and compelling, fit for both action and introspection. You can’t read a page of this without seeing it in movie terms. The psychologically violent love story played out against a variety of contemporary settings gives the narrative great scope. And in Jordan Wise and Annalise he has created two timeless people. This story could have been set in ancient Egypt or Harlem in 1903 or an LA roller skating disco in 1981. As Faulkner said, neither the human heart nor the human dilemma ever changes.

TRUE GRIT was reviewed by someone over the last 2 + years and I decided I needed to read it. When I saw a copy at a flea market for $.25 I decided the time had come. Or maybe it was the information that the movie was being remade by the Cohn Brothers and starring Jeff Bridges that 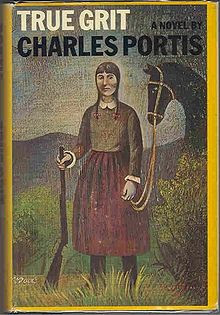 At any rate, I grabbed the book and read it in a matter of hours. The voice of its protagonist, Mattie Ross, was just that compelling. The story was simple but told well. It stuck doggedly, as doggedly as Mattie, to Mattie's quest for justice with very few segues.

Mattie Ross is a straight-talking girl from Arkansas who's just lost her father to a deceitful farmhand. Justice for this murder will only be achieved if Mattie can capture Chaney herself.

Chaney, the murderer, is "trash" hired by Mattie's father out of pity. The two men go to Fort Smith to buy horses and Mr. Ross ends up dead after being robbed by Chaney.

Mattie hires Rooster Cogburn, the toughest deputy she can find, insisting on accompanying him despite repeated attempts to throw her off the trail. He is a one-eyed, trigger-happy drunk but with a lot of the "grit" the impresses a young girl.

Joined by a Texas Ranger, named La Boeuf, chasing Chaney for another crime. the three run down Chaney, now part of the Ned Pepper gang, and find themselves justice though at some cost. The book ends as Mattie, a spinster, tells us about the final days of each of the three posse members.

The book is framed by the conceit of an old woman telling a story from her youth. We see what happens through her eyes, the eyes of a young girl. You can't help falling in love with Cogburn and Mattie by the end of the book. True Grit applies to both of them equally. This is surely a classic American story. I wonder if it's on school reading lists.

I might have been the reviewer you're thinking of, Patti. I read TRUE GRIT and rewatched the class film about a year ago. Bill Crider says every Portis book is different. Like you, I loved TRUE GRIT and can't wait for the Coen Brothers' version.

All those "she"s and "her"s in the reviews and citations of Leigh Brackett got by you, Patti?

TRUE GRIT at least used to be on school reading lists, and Portis is one of the other writers I need to read, having been a fan of TRUE GRIT the film since seeing it as a wee lad...five or six or so. Pity so few of John Wayne's other films can measure up to it.

I was amazed at how good he was in it.
I have been told DOGS OF THE SOUTH is terrific. I have to get it from the high school here though so I guess that's considered YA too.

I do fancy reading True Grit.

True grit was a sort of coming of age book for me. I will always remember it fondly.

Sorry I am so late today.

"Bullets" by Steve Brewer is my pick and now up on my blog at
http://kevintipplescorner.blogspot.com/

Well, books that are "YA-accessible" are not necessarily YA...consier MOBY DICK, albeit that's nto the most accessible of novels for anyone...

When I first read True Grit, I was surprised to find a character named Chelmsford, the name of my hometown (in Massachusetts; the only other two Chelmsfords in the world are the well-known city in England and a small town in Canada). No wonder True Grit has held a special place in my heart. Of course, the fact that it is a very good book helped.

I disliked the supporting cast of the original True Grit movie so much that I blotted the book from my consciousness. Sounds pretty good now, though.

I also have said favourable things about Portis's novel in the past 2+ years. It's one of the shining examples of how a Western novel can be both entertaining and fully achieved artistic piece of work.

The Borders I used my third-off coupon today at thought they might have copies of TRUE GRIT, but they were well-hidden, if so. Got my BLACK MASK antho with the coupon...otherwise, the fiction section went from KA Porter to someone likely, the length of the day is getting to me (and carpet glue, in this endless process), and the copy or copies weren't in the Borders western vestigial section, either.