And if you haven't had enough of me (and God knows I have) check out my story on Spinetingler along with the other great entries. in their revenge contest.

This is Part One of the Flash Fiction Challenge called LA RONDE-I think we have enough participants to take us to January at one per week. The idea was to write a story of around 1000 words where the protagonist is jealous of another person. The second writer (Dana King) will write a story where that person is jealous of a third person and so on. Here is the initial narrative. 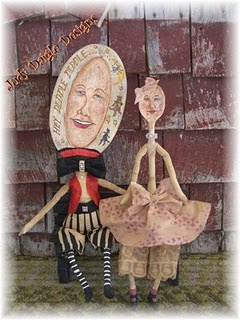 
"And the Dish Ran Away with the Spoon"

Grady Disch stepped into my field of vision the week before I began teaching at the Chesterton School. It was during my initial interview, when I was sitting in the Headmaster’s Office attempting to delineate my philosophy of teaching—his words. A ridiculous test for a chemistry teacher being asked to hop into the shoes of a newly dead predecessor. I’d paused, trying to come up with some edgy pedagogical turn-of-phrase that might disguise the fact that teaching in a high school was a personal failure. I’d intended to become a research scientist, but my inability to produce the requisite dissertation dictated a change in careers.

Suddenly, the cacophonous laughter of females turned our heads. A tall well-dressed man with hair worn long and a confident gait passed by. A flock of girls clung to him—one grabbing an elbow, another his jacket, a third carrying his book bag. Unintentionally perhaps, he invited their touch, helpless not to be loved.

“Grady Disch,” the headmaster said. “Our most popular teacher and brilliant to boot.” He shook his head in disbelief at the school’s good fortune in landing such an instructor. “Not that popularity is necessarily a good thing,” he added. Neither of us believed it.

“Dr.Grady Disch. He has a book of poetry in galleys and wrote the school play last year. There was talk of an off-Broadway production.” That was my introduction to the man who’d soon haunt my days.

On my first day at Chesterton, Disch plopped his plastic tray next to mine at lunch. “Prescott, right?"

“Charles,” I said, holding out a hand.

“Prefer Charles to Charlie or Chuck?”

“It always ends up being Charles. Seems easier just to start there.” I remembered a half-hearted stab at Chaz when an actor with that name was in fashion.

“Tagged with a name like Grady, I understand.” Radiating empathy, he picked up his hamburger and took an enormous bite. It’d been a long time since I watched someone eat red meat. Bloody juice dripped down Grady’s chin, but he made it work. “We’ll have to grab a beer after work on Friday,” he suggested. “Married?” I shook my head. “Two bachelors to divide the spoils then.”

I looked in alarm at the students around me.

Grady laughed. “I was talking about the single female teachers. There's at least six possibilities between the upper and lower schools.” He looked at me speculatively. “I think there’s a third grade teacher with your name on her.”

I smiled. Attempts to match me up never worked. Celibacy was the only thing with my name on it.

We had that beer, or in my case a glass of red wine, on Friday night but found little to say to each other. He answered my questions about the school but seemed distracted by the number of women in the bar. None of them passed by without giving him a look. One or two stopped and put a hand on his shoulder or arm. He handled it like someone used to such shenanigans. Heck, I wanted to touch him myself-despite having no leanings in that direction. He was magical; perhaps some of his magic would rub off

It grew worse although we always managed to maintain a pretense of friendship. The depth of his gifts was so enormous; it was impossible not to be jealous. It was equally hard not to be impressed. It seemed effortless and he wore his mantle lightly. My sole hope was his success would eventually carry him off to a universe where I didn’t have to deal with him. A place where I didn’t have to consider his superiority. If he had a Ph.D., a talent for writing poetry and plays, alarming good looks, extreme likability, family money (which he must given his Porsche and his wardrobe), he'd soon find something else to do with his time.

Things came to a head. My best student, Mary Doyle, spent a semester under my tutelage preparing a project for the State science fair. Her project linked over 400 consumer products to possible adverse health effects using the Material Safety Data Sheets (MSDS). It had first place written all over it. That was the plan until Grady Disch handpicked her to star in his school play. Naturally the opportunity to spend untold hours with Mr. Disch took precedence over her desire to save the public from ill health.

Justice must be meted out. I took my time with a plan, watching Mary Doyle perform in Disch’s play (so-so in the part) and substituted an inferior project from an average student on chemical structures in plastics without chastising Disch or Mary.

Not even an honorable mention came our way.

It was a week later when I picked up a tablet in the teacher’s lab and saw the note. It wasn’t exactly a note—it was the tracings from a note on a piece of paper torn off the pad. Disch wrote as emphatically as he lived.

It read, “Sarah-Meet me in the boathouse at four. GOD.” I knew at once it was Grady (the phantom O was an affectation achieved by his ornate rendering of the G and D). The addressee was Sarah Spooner, a fifth grade teacher in the lower school. I’d spotted them in her car only last week.

It was simple to fill in those tracings in a heavy black ink such as Disch routinely used, and easier yet to choose among the three Sarah’s registered in the upper school. I chose the most fetching of the three, Sarah Westerson, slipping the forged note into her copy of As I Lay Dying while she was filling beakers in the lab.

The Headmaster, contacted by Mr. Westerson despite his daughter's pleas, dealt with the situation quickly. Disch was gone within hours, and although it was completely unnecessary, Sarah Spooner followed quickly.

Steal their hearts but not their minds, I wanted to say. Goodbye Mr. Disch.

You can find Part Two on Dana King's blog next Tuesday, October 12 but I will post the info again.

Patti - Oh, what a terrific beginning! I'm hooked and can't wait to see the next part of this story. I like the school setting, too (guess it's my education background), and the characters are terrific.

Great characters! But poor Dana, having to make someone envy your wimp :D

Excellent! The characterization is very good, and you did such a fine job putting everything into he short form but making it complete and logical.

No Dana has to make Grady Disch envy someone else. The last person in the line, me, will have to have someone envy him.
Thanks again.

Thanks, Randy. How ya been?

A great read, Patti. A great name for him, Grady Disch, which made you dislike him even more. Looking for ward to reading and taking part.

Dang, I was envious of this guy myself. It'll be interesting to see what Dana does with him.

Great start, Patti! I'm looking forward to how this is all going to unfold. Do we all get to use nursery rhyme titles?

Only if you want to. It just sort of happened. Thanks!