THE END OF EVERYTHING, Megan Abbott 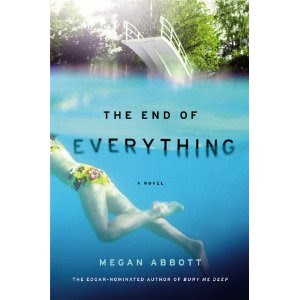 
Thirteen-year old Lizzie Hood and her next door neighbor Evie Verver are inseparable. They are best friends who swap bathing suits and field-hockey sticks, and share everything that's happened to them. Together they live in the shadow of Evie's glamorous older sister Dusty, who provides a window on the exotic, intoxicating possibilities of their own teenage horizons. To Lizzie, the Verver household, presided over by Evie's big-hearted father, is the world's most perfect place.

And then, one afternoon, Evie disappears. The only clue: a maroon sedan Lizzie spotted driving past the two girls earlier in the day. As a rabid, giddy panic spreads through the Midwestern suburban community, everyone looks to Lizzie for answers. Was Evie unhappy, troubled, upset? Had she mentioned being followed? Would she have gotten into the car of a stranger?

Lizzie takes up her own furtive pursuit of the truth, prowling nights through backyards, peering through windows, pushing herself to the dark center of Evie's world. Haunted by dreams of her lost friend and titillated by her own new power at the center of the disappearance, Lizzie uncovers secrets and lies that make her wonder if she knew her best friend at all.
Posted by pattinase (abbott) at 12:00 PM

I have THE END OF EVERYTHING on order. Hope Megan sells this to Hollywood. Sounds like it would make a great film.

Wow. You're first in line.
Hollywood has two of them already-- and two of everyone else's.

I wonder if they deliberately made the cover look like THE LOVELY BONES?

A lot of blue covers right now, aren't there. Blue is the new shoes. Remember when all the covers had shoes on them a few years ago.

Sounds like my sort of book.I loved Die A Little, which I read the other month.

This sounds VERY intriguing. I am putting it on my TBR list for sure.
I've never read Megan Abbott, this will be my first.

She talked about this one a little at Bouchercon, and it sure does sound good.

Did she email you that we'd met?

The only thing we got so far was a picture of Megan with Daniel Woodrell, one of her heroes. She is calling tonight for Phil's birthday. I was so jealous hearing about everyone's great time.

That is a fine cover and does sound interesting.

My eye skipped over the typo at the head of the entry, till I put my pre-order in...not available till next July. Well, I am probably not second, I suspect.