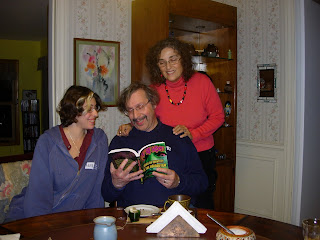 Martin Edwards was talking about setting today on his blog. Wondering whether he would eventually use Barcelona in a story.

I have, on occasion, used a foreign setting in a story (Dubrovnik, Amsterdam, England) but I don't usually do it because most settings don't make themselves known to me that quickly. I spent a year in England and Amsterdam but I was still an outsider, especially where the language is difficult (Manchester more than Amsterdam).

Once or twice, making the characters tourists (Seville) worked. But I really can't capture the essence of a place like Bruges or Barcelona or Nice after spending only a week there.
So most of my stories are set in Philly or Detroit, but very often I set them outside those cities in a fictitious place I call Shelterville. It stands in for all the towns I've lived in or drifted through. Shelterville is amazingly generous in allowing me to modify it to fit the story. Its citizens are amenable to being crooks, scoundrels, victims and caretakers.

How do you handle setting? Are you usually specific about it? Do you ever set stories in places you've never been? (Obviously historical fiction must do this) Does research tell you enough about such places?
Posted by pattinase (abbott) at 10:17 AM

I've only ever known this one area that I live in, really. And it has everything I want for my stories. It has small cities, wide open spaces, abandoned buildings, and proximity to four major cites if I need them. And I don't have to worry about getting the detail wrong or mixed up since I know this place so well.

I find my stories are almost always tied closely to their settings, and for that reason I think the easiest thing to do is create a town from whole cloth. But lately, I've been writing of a lot of places I'm only passingly familiar with, if at all. I'm with Lawrence Block on this one; research what you can, read other fiction set there, and make up what you have to to fill in the blanks. Of course, I've no idea yet whether I've been successful, and even if it turns out I mostly am, I've no doubt locals will be more than happy to point out my mistakes.

One of the most unusual interchanges I ever heard over setting was when an audience member challenged Ruth Rendell on Kingsmarkam and Rendell had to remind her she had made the place up, that there was no way for them to go there and check it out.

I spend quite a lot of time finding places for things to happen that set the story in the parts of the city (Chicago, so far) that aren't just touristy places. My next story will be set largely in a fictional county adjacent to Pittsburgh for legitimate reasons, but it's scaring hell out of me.

I was in Pittsburgh last summer and impressed with how much it had going for it--at least compared to Detroit. All those wealthy families kept it up, I guess. The Mellons, the Carnegies, etc. Interesting ethnically. Some nice art. Not Chicago but better than most other midwestern cities, I've been in. Seemed like hospitals and colleges ran things now. There must be a book about it.

My stories tend to be located in areas I am familiar with, like the mountains in the Pacific Northwest or a small town. If I don't know the area all that well, I research it thoroughly until I have a good sense of the landmarks. You could call it having an 'intuitive' awareness of a place. I think as writer, you have to be able to describe the area enough for the reader to be able to visualize it in their mind.

Sometimes a place seem immediately familiar to you and other times, it's a complete enigma. For instance, I would never set a story in the southwest, because I don't have any feel for it. I can't imagine living in a place without winter, for instance.

This isn't about setting, it's about your poll.

I'd like to pick: invest in public transit and European-style high-speed trains. That would provide a huge amount of jobs to build, a lot of jobs to maintain and will get people around a lot more efficiently than cars.

Son of a gun, John, It won't let me alter the poll, so I'll add a second one with that choice.

Shelterville, huh? Mine is Seaville.

Oddly similar. You relate to the sea and I relate to shelter.

I agree with your point about needing time to get the feel of a place, and I think it's almost impossible if one doesn't speak the language.

Yes, I never felt I had any insight into the Dutch at all. They seemed extremely guarded and reverted to Dutch if what they were saying was extraneous to us. So when I wrote a story set there, the characters were American. I got to use the city but not the people.