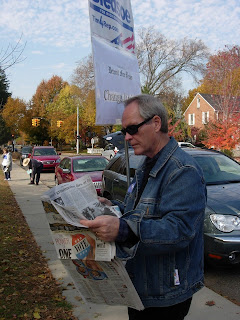 Phil reading at the polls.

I am procrastinating here so stop me if you've heard this story. When I was nine, a schoolmate's mother fell down the steps carrying a load of laundry and died. I still remember the principal coming in and taking her away to tell her the news. We had just returned to school from lunch and it was nearly impossible to believe that ten minutes later, Mrs. McMaster was dead.

Since then I've had an irrational fear of falling down the basement steps with a load of wash. I've actually done it once and survived, but still I rarely head toward the steps with laundry without thinking about it.

Do you have an irrational fear of a particular way of dying other than the shared fear of heart attacks and cancer? Or am I the only one who approaches those steps or something else with trepidation?
Posted by pattinase (abbott) at 9:17 AM

There is a spot on the highway here in town where the road makes a gradual curve under two overpasses. A classmate of mine died there on a rainy day a few weeks before our graduation.

I always slow down and hold the wheel with both hands and especialy so if it is raining.

Oh, that reminds me of another fear I had when I lived in Philly. Someone we knew jumped off a bridge over the Wissahickon Drive, I never passed that spot without picturing myself jumping. I'm a little bit of a depressive, I think.

What am I NOT afraid of? We're writers; we specialize in worst case scenarios. That's why every little health problem, somewhere in the back of your mind, is really some exotic, incurable disease, why every bridge is on the verge of collapse, and why that guy you accidentally cut off on the freeway is really a psycho killer who's going to hunt you down.

Or perhaps this is too much information.

Actually that's true. What am I not afraid of sums it up. The constant visualization of all the possible scenarios is the worst thing about it.

When you are nine everything experienced is up close and personal. It makes an impact. What you have to do is distance yourself from it. By focusing on an unfortunate thing you bring the possibility of this same incident happening to you. Think about something else, something positive and uplifting.

I've been trying, Barbara but the steps loom.

In a car, underwater, and unable to get the electric windows to go down. I keep one of those "window smasher" gadgets with me at all times.

And this from a girl from the desert!

Now, that's one I hadn't considered. Anyone keep a ladder to climb out of the second story window in case of fire?

Re: cars with electric windows-- Having a window smasher readily available is smart thinking. Trust me. [ But I wouldn't recommend keeping a sawed -off shotgun under the front seat for that purpose.]

And Patti, a particularly nasty incident on Southbound U.S. 23 [by Fenton] has made me rather phobic of green Ford Escort's. Thankfully they no longer make 'em.

Getting T-boned driving through an intersection. I think I saw too many of those dumb car crash shows when I was a teenager. I look every single time I go through an intersection even though I have the green. Although I thought we weren't supposed to focus on these fears? Or maybe we are and that gives them less power?

I know 2 people who are mortally afraid of gum. Like you can't even chew gum in front of them. They think they will choke and die. And no, they don't know each other.

Green Ford Escorts. Glad they're off the road mostly.
Two people with gum phobias. At first I thought you meant gun but gum is way better. People running red lights. I see it every day. And people jumping them. Nasty stuff.

I don't think this an irrational fear! It is risky, and you are wise to learn from the lesson. My mother died on the couch in our living room. When I was still grieving, with insomnia, I couldn't pass the couch in the night without putting all the lights on. Since then we moved our furniture in and mom's out, but I still have a funny feeling.

Jenny-My husband's grandmother was carried out a door after she died-the door was then boarded up and never used again. Now that's real superstition.

I have an elevated fear of the steps in my own house. I broke my coccyx on one set, and a fall on the other set knocked the wind out of me in a disturbing way.

I wasn't carrying laundry, so no fear attached to that chore. In the second case I was on the phone with my sister, but happily I have been able to chat with her without feeling unduly threatened.

Falling down steps, where you head often ends up lower than your body, is a weird sensation. Once I fell on ice, and was completely airborn for a few seconds. I hate falling. Six weeks ago I fell on a twig and sprained my ankle for the 10th time.