EYES WITHOUT A FACE 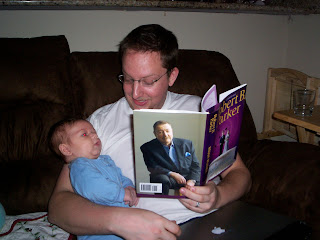 Spencer reading Spencer (with the help of Daddy Quertermous).


EYES WITHOUT A FACE
I saw this movie for the first time this week. A couple of observations. The first and last scenes are brilliant, eerily setting the tone and then bringing it full circle. The pace was strangely slow--people even

moved slowly. It was almost reminiscent of zombie movies. There was an ethereal quality-was it the lighting? Sometimes it looked sharp and other times so fuzzy. The barking dogs, the foggy night, the sycophantic nurse, the basement operating room, the balletic but disfigured daughter, the caged birds and dogs all were used to great effect. I think I'm going to like this movie even more tomorrow. A banal final thought: the disfigured girl wearing her mask looked so much like Mia Farrow.

What are the scariest movies for you? I'd pick THE EXORCIST and THE BIRDS.
Posted by pattinase (abbott) at 12:00 PM

Glad you liked Eyes Without a Face. It has a Continental quality to it that I don't think has ever been re-captured in European horror films since. Even aside from that, it is indeed a brilliant use of what were arguably limited resources to create some beautiful ethereal scenes. Edith Scob in that creepy mask looks strangely gorgeous through out the thing.

If you saw the Criterion DVD of this...there is also a short film/documentary that Franju made early in his career called Blood of the Beasts, which is simply scenes from a Parisian slaughter house...not for the squeemish. However, one can see where Franju got some of his ideas for Eyes Without a Face from this early documentary. Blood of the Beasts is a beautiful documentary in a horrific way what with sinews and blood and guts.

I've been meaning to get around to my copy of EYES from Criterion...often I at least check to see if the disk is defective, but I think that one went into the TBViewed pile even before that small exposure (I've seen the film on tv twice or so over the decades).

My best/most diquieting/scariest horror films include THE HAUNTING, the "You're In the Picture" segment of THREE CASES OF MURDER, CAT PEOPLE the original (particularly when seen in a theater), ONIBABA, CARNIVAL OF SOULS the original, HOUR OF THE WOLF (and the opening nightmare of WILD STRAWBERRIES isn't too shabby), and the goofy aspects of VIDEODROME don't negate those which are powerful.

And Robert Bloch's THRILLER episode, "The Weird Tailor." Based on his own story, first published in WEIRD TALES.

Jacob's Ladder scares the crap out of me. Also Night of the Living Dead. And Halloween.

I've never seen this, but now I'll have to. Scariest movies for me (when put into the context of the era I saw them) were: Wait Until Dark, The Exorcist, The Man Who Fell to Earth (I woke up screaming the night I saw it), The Omen and Nightmare on Elm Street. The Bad Seed was pretty scary to me when I saw it too.

My two scariest mocvies aren't really what would be called horror flicks: JAWS and TAXI DRIVER.

JAWS changed how people spent their time at the beach for a couple of years, and it's become an icon for the unfathomable dangers of nature. (No pun intended.)

I still avoid taking taxis whenever I can. Travis Bickel is in one, somewhere.

She does look pretty terrific. I wonder if a mask is in my future should time be too cruel. My DVD had nothing on it at all-just went straight to the film.
Oh, Carnival of the Souls was terrifying. And The Haunting shows how much you can do by doing little.
Jacob's Ladder is scary. I remember it. Halloween just scares me to death because there's no let up.
Wait Until Dark, it was being performed as a play when we were in Portland and I was too scared to see it.
After seeing Jaws, I couldn't bear to get on the freeway. Taxi Driver is a clever pick. Travis Bickel is another Hannibal Lector to me.
Repulsion- I was too young when I saw it and nightmares for months after. Maybe I'm still having them. Much like Knife in the Water.

Psycho--Maybe not a horror movie but it left an afterchill that lasted for months/years.

Psycho-By the time I saw it, I had seen the shower scene too many times. But the scene where he whips his mother around, knocked me out. WOW.

The Thing From Another World.
I was young when I first saw it. It scared me , but I still loved it.

I tend to think of PSYCHO the original (based on Robert Bloch's book) and REPUSLSION and KNIFE IN THE WATER as suspense films rather than horror, which I tend to think of as supernatural...of course EYES isn't particularly supernatural so much as eerie. To add the suspense films that have floored me, REPULSION and PSYCHO and ODD MAN OUT and PEEPING TOM and THE VIRGIN SPRING and THE VANISHING the original and, among recent films, WITH A FRIEND LIKE HARRY.

Okay, the original The Vanishing was pure fear for a claustrophobic. Too bad they screwed up the US version. Peeping Tom creepy. Never saw Odd Man Out or The Thing From Another World. I stand by the Exorcist. Anything with children is especially creepy.

Not scary, but the most unsettling: Picnic at Hanging Rock.

My first time seeing "Repulsion", it had just been released. I was in sixth grade. It definitely was not a film for chidren. Yet as a child, I returned two more times to see it. I still can vividly conjure up scenes from that movie. The Hallways with the arms that came out and grabbed the young girl who was sliding into insanity. The returning shots of the pig's head on the platter as it decomposed over the course of the days while she went insane. I think there may have even been some nudity or semi nudity. I do not remember that, but those two other images still haunt me to some degree.

Or recent films, I guess the "SAw" series would rate at least an honorable mention.

We took a friend to see Picnic at Hanging Rock and he was visibly shaken by the film. We had seen it first on VCR and I think the effect was less. Never saw SAW. Have to check it out.

I haven't seen this movie. As for scary movies, I'd say 'The Exorcist" tops it for me.