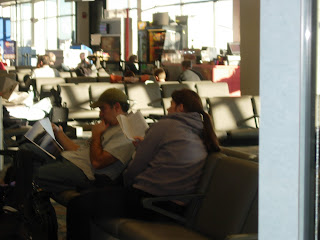 Not that anyone around here would.


People reading at the Portland Airport.
Posted by pattinase (abbott) at 6:54 PM

Psych! I voted two weeks ago. I wish every state had early voting. For everyone who has just the one day, I'm with you in spirit. Bring something to read, something to drink and hang in there. Wednesday, it's a whole new deal :)

I voted weeks ago too, one of the few assets of turning sixty. I am worried that people will be standing in line in Michigan for hours with no early voting except for us oldies.

Another one who voted early! My husband and I sat at our dining room table, filled out our ballots, and after sealing them, toasted each other with sparkling cider. Arizona has mail-in ballots, as well as early voting, and we mailed ours. Lines were 5-7hours long on Friday for early voting.

I voted early as well. i went hoping to avoid crowds, being wheel-chair bound, but they were backed up out the door. everyone was nice enough to slide me in front.
It was a very civil event. I hope tomorrow is equally as nice around the country.

We can also vote early in Ohio.We thought of voting absentee but didn't get the paperwork in time. So tomorrow it is! #1 daughter in NYC placed her Obama vote with an absentee ballot.

Just heard a Virginia judge refused to extend voting hours as requested by the NAACP.

Well, it used to be the case that Virginia sites couldn't close the polls for anyone already in line at the official time of closing. We'll see...or hear of it...(the Virginia Democratic Party is basically the Republican Party anywhere else, and the VA GOP is basically pretty close to Mussolini's dream, and I bet I can guess which that judge came from).

Tim Kaine, Virginia's Democratic governor has already said anyone in line at the end would be allowed to vote.

Here in Ohio, if you are in line when the polls close at 7pm, you have the right to vote.

We waited until the Big Day. More fools us for wanting our kids to see the process. But at least Hamlet likes to walk around the cemetery behind Town Hall...

Hey, what's up with you coming to Portland and not telling Chris or me?? :)

My wife, son and I voted in Virgina at 10:15 AM and the wait was under 15 minutes. The Virginia judge refused to extend voting hours as requested by the NAACP since that had not shown any need to do so especially since all voters in line at the closing time (7 PM) are entitled to vote.

Is this my brother, Jeffrey?
The wait here was very short. But we have so many polling places, virtually one every few blocks.

Yes, this is your brother.