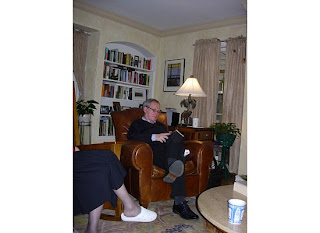 I just read Henry Louis Gates' remembrance of his grandfather in the New Yorker and it got me thinking about mine. My paternal grandparents were both dead when I came on the scene since my father was the third youngest in a family with nineteen kids.

But my maternal grandfather was around for my first 12 years, dying of a massive heart attack on the way home from seeing Please Don't Eat the Daisies at the Keswick movie theater in Glenside, PA. He crashed his car into their apartment building. I was watching a rerun of Twilight Zone when we got the news on a hot July night-- the episode where Burgess Meredith loses his glasses. When the phone rang, I knew it was bad news.

I adored my grandfather. He listened to me when no one else did. We had long talks every Saturday while my brother was in the doctor's office getting allergy shots. He gave me my first record player along with my first album, Gigi. He and my grandmother took me to my first movie, Daddy Longlegs. He taught me how to pump a swing.

My grandfather ate a small dish of canned petite soeur peas every night with his dinner. He always sat on the floor if he had a choice. He was an architect, but I dreamily convinced myself that he would have preferred to be a drummer, which he was until he married my grandmother. He collected four-leaf clover and stamps. He was an architect on the Cathedral of Learning building in Pittsburgh. He wore Bermuda shorts and sandals whenever he could.

What do you remember about your grandfather(s)? And if they're still alive, what will you remember?
Posted by pattinase (abbott) at 10:00 AM

My maternal grandfather passed away before I was born. My dad's father lived until I was around ten. I was too young and stupid to appreciate the chance to be around him and so I didn't talk to him nearly as much as I should have. What I remember about him is how he kept doing his chores around the house until he was well up in his eighties, such as climbing up on the roof to repair it, and how stubborn he was about such things. In other words, he was just like my dad! Or I should say, my dad was just like him. They were both avid storytellers, too.

My husband's grandfather, who lived well into his nineties, repaired his own roof too. I can remember all of us watching him from below with our hearts in our mouths. He also planted hundreds of red tulips every year, followed by as many red tomatoes. He read ten Westerns a week and told great stories too, one about seeing Babe Ruth pitch when he was a kid. My own grandfather was more likely to draw a story.

My maternal grandfather died when my mother was seven. I was one of more than thirty grandchildren. My paternal grandfather died when I was a young teen. He had a great, dry Yankee sense of humor and read a lot of mysteries in discounted hardcover editions. What I remember most was a story about when he was younger and was in charge of a local cemetery. The cemetery had begun during the Revolutionary war. My grandfather was clearing an old portion of the cemetery for an expansion and dug up the unmarked grave of a baby. He just held the small bones and cried. I'm proud to be his grandson.

My children will have one of their grandfathers until their late thirties. My husband had his that long too. Very variable how long we have them, isn't it? The ones we lose early probably never have time to show us they're mere mortals whereas the ones we see in extreme old age look very mortal.

My Grandpa Jack died when I was about eight, but I remember him vividly. He used to walk everywhere (my grandmother drove their only car to work every day) and he used to walk with me and his black lab to "the square" and we'd go into Cole's Drug Store and he'd buy me a raspberry lime rickey at the soda fountain. He had a beautiful voice and when his friend Mike Dobbins would come to visit, they would do shots of whiskey and drink beer and sing Irish songs. He read Prevention Magazine and he used to do yoga. He came from Newfoundland and only went to school until he was nine. He used to read a lot and he did crossword puzzles in pen. I could go on and on. I still miss him.

My maternal grandfather taught me his love of knowledge. He may have been the most intelligent person I'd ever met before my daughter came along. (She scares me sometimes, really.) He was no nonsense about remaining curious about why things were the way they were, and that has served me well thirty years after his death.

On the flip side, I have also learned over the years that, as a father, he was often drunk and abusive, generally an SOB. SO he also taught me no one is all any one thing. Look for the good in otherwise bad people, and don't be too disappointed when you find the clay feet of others.