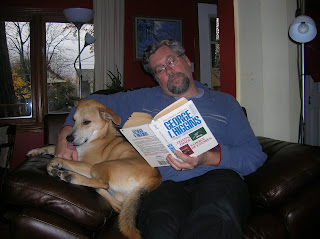 I am not much of a Bond girl, especially since the replacement of Sean Connery with a bevy of pretenders. (Daniel Craig is the notable exception, maybe the best Bond for the current era).

So I am not wedded to a particular notion of what James Bond should be like. Perhaps that's why I was able to enjoy Quantum of Solace more than most of the reviews I've read. It didn't bother me that he was grumpy, nasty and prone to getting rid of people without asking too many questions. That seemed reasonable to me, given the type of man who becomes a spy, a sociopathic type, right?

But my brother, who saw the movie with me, is more of a Bond fan and found Bond's behavior in SOLACE off-putting. He also thought the film lacked wit, a sense of humor, great gadgets, the prerequisite cool, indestructible car, the fantastic opening chase, the great song. Okay, maybe so.

But it didn't bother me that a lot of questions went unanswered; don't they always? And I especially enjoyed the fact that I could follow the plot. The night before I was in a sorry state trying to keep up with Diamonds Are Forever, with its circus theme. Although again I fault watching it on TV. My brother said that getting up a dozen times for various reasons impeded my understanding.

None of the elements mentioned above were important to me. So I asked myself: do I consider Bond a hero? Or does he occupy a world so separate from mine that I can't take it seriously.

And then I wondered what characteristics should a hero have?

So here's the question. What characteristics should a hero have? I'll start with a good jawline.

My wife is much more into Bond than I am and as far as heroes go I tink first and foremost they need proper motivation. I tend to like reluctant heroes that would rather be sitting on the end of a dock fishing but for whatever reason are forced into action.

I find heroes that are too noble to be off putting.

I agree. Unexpected heroism is more interesting. What will turn some ordinary Joe into a hero. The Tom Hanks part.

Well, what's needed for a hero is courage and compassion.

What's needed for a good Bond film is a scriptwriter better than that execrable hack Paul Haggis.

I don't know about compassion unless you're going to factor in a good motivation rather than a paycheck, a need to be a hero, a derring do nature.

I tend to prefer the 'Steve McQueen' anti-hero type from Bullit, someone who's a bit conflicted by the events surrounding him. As for Craig, I liked him in Casiono Royale but based on mixed reviews, I'll probably wait for the dvd. I'm glad you liked it though.

I'm old-fashioned. (Probably because I'm old.) To me, Chandler summed it up in The Simple Art of Murder.

But down these mean streets a man must go who is not himself mean, who is neither tarnished nor afraid. The detective in this kind of story must be such a man. He is the hero, he is everything. He must be a complete man and a common man and yet an unusual man. He must be, to use a rather weathered phrase, a man of honor, by instinct, by inevitability, without thought of it, and certainly without saying it. He must be the best man in his world and a good enough man for any world. I do not care much about his private life; he is neither a eunuch nor a satyr; I think he might seduce a duchess and I am quite sure he would not spoil a virgin; if he is a man of honor in one thing, he is that in all things. He is a relatively poor man, or he would not be a detective at all. He is a common man or he could not go among common people. He has a sense of character, or he would not know his job. He will take no man’s money dishonestly and no man’s insolence without a due and dispassionate revenge. He is a lonely man and his pride is that you will treat him as a proud man or be very sorry you ever saw him. He talks as the man of his age talks, that is, with rude wit, a lively sense of the grotesque, a disgust for sham, and a contempt for pettiness. The story is his adventure in search of a hidden truth, and it would be no adventure if it did not happen to a man fit for adventure. He has a range of awareness that startles you, but it belongs to him by right, because it belongs to the world he lives in.

If there were enough like him, I think the world would be a very safe place to live in, and yet not too dull to be worth living in.

This is lovely and don't we all hope to write or read of men like this.
Although in a pinch, I can live with a depressed, grumpy assassin on my side.

I'm sorry but I positively hate this film - the point is for me that the Bond franchise gives us more than run of the mill action movies, of which QOS is one.

You're definitely in the majority with this opinion. It seemed of a piece with all the Bond movies I've seen in thirty years. The first three I liked but nothing since those. Esp the Moore and Brosnan ones, which seem so slick and without personality.

Without compassion, a hero is just a thug. Courage to take action, compassion to know when to stop.

I liked the first PB Bond film, GOLDENEYE, because for the first time since ON HER MAJESTY'S SECRET SERVICE you got to see what a toll this would take on anyone. Also, Famke Janssen.

I did see that one and the problem for me is that Brosnan was still Remington Steele. I couldn't separate the roles.

I didn't have too much problem with that, since Roger Moore's Bond was essentially an older and more amused Remington Steele and Dalton's Bond was a self-satisfied thug. (I didn't bother to catch any of the Dalton Bonds in a theater.)

But the other PB Bond films were pretty dire. Even with Halle Berry and cute ice effects.

I was mad for Remington Steele so the Bond role seemed like cold potatoes.

I rather enjoyed QOS. I didn't find Bond off-putting, didn't miss a buncha gadgets, and found Craig compelling despite some admitted lacks in terms of writing and, heavens, editing the high speed stuff. Craig seems to bring more to Bond than anyone since Connery.

A great movie? Nah. But an entertaining one. That may be because I don't carry a lot of Bond baggage around. I gave up on Bond at, "Octopussy, Octopussy, Octopussy," so even though I've seen the subsequent offerings, I wasn't invested in them. Craig alone makes me willing to invest again, even if QOS isn't fabulous.

Oh, and I think the opening song rocks, the only one I've actually liked since "Live and Let Die."

Bill-that sums up our feelings precisely.

I agree with David Cranmer on Steve McQueen, although another actor with an edge for the part might have been Richard Boone.

Favorite McQueen movies: Thomas Crown Affair, Bullett, Love With the Proper Stranger, Baby the Rain Must Fall.
Haven't thought of Richard Boone in years. I don't remember him in movies. Just Have Gun Will Travel.