Patti's Pen & Picks: The Bookworm's Award: "Patti O'Brien has just awarded me The Bookworm's Award. She adds, "Along with the award, there are a few rules. Open the closest book to you—not your favorite or most intellectual book, but the book closest to you at the moment—to page 56. Write out the fifth sentence as well as the next two to five sentences." 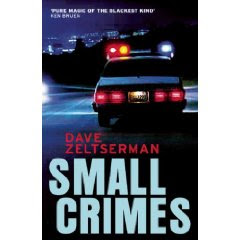 Okay, I'm rushing madly through the exciting SMALL CRIMES by Dave Zeltserman. So here we are at page 56, where the protagonist is meeting up with his former wife after being in prison for some years.
(BIG CONGRATS TO DAVE FOR HAVING SMALL CRIMES CHOSEN AS ONE OF THE TOP FIVE MYSTERIES OF 2008 by NPR).

...Seeing her, I just started kidding myself, and then once she started pushing my buttons, I guess I had to start pushing hers also. That was the thing with the two of us, we knew how to push each other's buttons.

I won't pass this meme on because I'm pretty sure I've done it before, but feel free to pick up the baton because it gets more book titles into the air. And Dave's was a great one to get to mention.

Happy to do this because I'm having such fun re-reading the new "Blindspot," by Jill Lepore and Jane Kamensky (I got to interview them for the Boston Phoenix and am now reviewing it as well for the SF Chronicle, hence the rapid re-read):

"I will yell, lad. I will yell aplenty. Aye, and I will curse. But I am the first to admit: I am a poor governor of my temper. But I won't strangle you. And I can't have my bluster be the only sound in this lonely house. Speak up," I said, straightening myself.

Her fingers slid up to the back of my hand, gently squeezed my wrist, and pulled my hand down to cup a full warm mound. She strained her body forward, pressing the soft, silk-covered flesh into my palm. She wasn't wearing a brassiere.
"Finish your drink," she whispered.
From Pattern For Panic by Richard S. Prather, the 1955 Berkley non-Shell Scott version.

I'd let the drink wait. Thanks, Randy. That brightened my morning up.

That probe began because Burns had learned the name of a major narcotics trafficker who had ordered the slaying of his girlfriend. Unable to prove the murder, Burns and Edgerton instead spent months on electronic and telephone surveillance, then took the dealer down for drug distribution to the tune of thirty years, no parole. To Edgerton, a case like that was a statement of a kind, an answer to an organized drug trade that could otherwise engage in contract murder with impunity.

From HOMICIDE, A YEAR ON THE KILLING STREETS, by David Simon

I gotta read that.