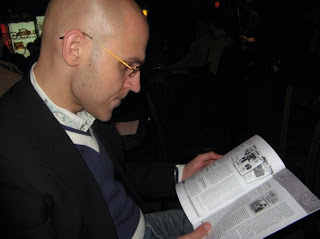 The Grand Hotel is as grand as it promises and you can get to it by taking a lovely boat ride from the northern tip of the lower peninsula in Michigan (Mackinaw City). I guess you can fly in too. 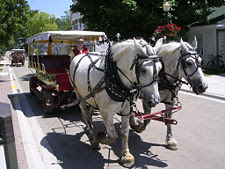 I touched on the Grand Hotel last week and the site with all the information is here. 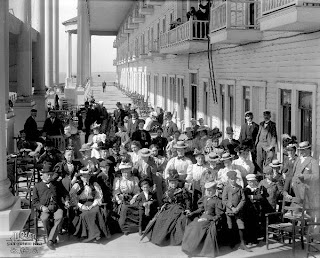 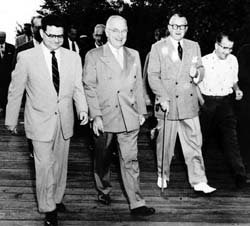 is on an island where cars are forbidden and have been almost since the beginning, which was in 1887. It's a luxury hotel with the most sumptuous, if rather traditional, meals you could dream of. The porch

is the longest in the world.

The film Somewhere in Time was filmed there (based on the Richard Matheson novel and starring Christopher Reeve and Jane Seymour, 1980).
Mark Twain gave lectures here in 1895.

The entire island is a treat with buggy and bike rides, stunning vistas, fudge galore, charming restaurants. If you want a pleasant getaway, this is it. The Grand Hotel is not the only place to stay so you don't have to be wealthy to take a trip to Mackinaw Island.

Check out Travis' other My Town Monday posters.
Posted by pattinase (abbott) at 10:00 PM

Great looking place, a step back in time!!

I don't believe I've ever really read about Mackinac Island but I have seen Somewhere in Time and now know where they filmed those striking scenes.

Mackinac Island is interesting, and when I visit some friends in Michigan, which I have been threatening to do for years, I will surprise them and tell them that Mackinac Island is a must-visit location for me. Thanks for sharing your impressions of the Mackinac experience.

But what really has me going is a couple of posts back...

I am simultaneously gobsmacked that anyone would want to watch a movie with people talking behind them and snorting with laughter that your husband has not shared the ending to the odd-duck, beautifully plumed movie that you bailed on in the last twenty minutes.

Seriously, while I am with you on the big-screen experience over the small screen, I am so not with you on voluntarily having 'gabbers' behind me whilst imagining that otherwise delectable cinema experience. I imagine those 'gabbers', yes, but with that same dour look on my face that Grant Wood captured so well on his dentist when he painted American Gothic.

I think I am going to have to follow you for a bit (by that I, of course, mean electronically follow your postings, nothing more), and maybe root around in the archives. I think your reading theme is great and you have interesting posts.

Thanks for leaving a note on my blog. If you were not expecting that as a description of Hong Kong, pull up the tag for spiders. The first story is Taiwan based, but the second is from Hong Kong and gives a whole new appreciation for the great outdoors in Asia.

All the best from the Far East,

Chris- I would prefer not to have talkers behind me, but the big screen is essential to my true immersion in a film. And I will follow you in your adventures in more exotic locales.

I's heard the name but knew nothing about the island. Thanks for the education.

What a wonderful spot.

Loved the movie 'Somewhere in Time' and always watch the credits at the end to see where movies were filmed. Thanks Patti, for a great visit to a place I want to see.

I hven't seen the movie in years. Always have felt too sad about CR.

I've always wanted to visit Mackinac Island and the Grand Hotel, even before the movie came out. I used to work for a tour company that did a tour of Michigan every spring, coinciding with the Holland Tulip Festival, but I never got to go on it. One of these days I'll visit your state. There's more to see than most people imagine.

Yes, one of my favorite places is Saugatuck on the western side of the state. And I've never been to the UP. (Upper Peninsula-400 miles more of Michigan)

Thank you so much! This is on my list of places that I want to visit!

I've been there!!! I was 17 years old and my parents took us to Mackinac on the way to the UP. I remember being intrigued with the "no cars" rule and also eating a pound of fudge in one day. I could do that back then.