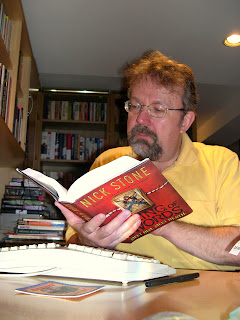 
Ed Gorman is the author of dozens of novels. Recent ones include SLEEPING DOGS, CAGE OF NIGHT and THE

NIGHT REMEMBERS.
Visit him at http://newimprovedgorman.blogspot.com/

Hard to know if a book was a fairly easy go for the writer or if it drove him to drugs and e-porn. I hope The Handle by Richard Stark was a pleasure for Donald Westlake to write because it sure is a pleasure to read.

Now while THE HANDLE is every bit as tough as Dick Cheney's heart, the hardboiled aspect is played off against the sorriest group of human beings Parker may ever have had to work with. And the sardonic way Westlake portrays them had me laughing out loud at several points. 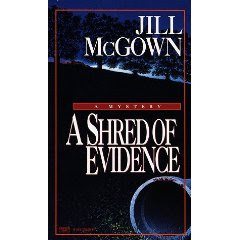 Face, was recently published in America by Penguin. Her second, Hurting Distance, is published by Soho Press in hardcover. Penguin US will publish her third, The Point of Rescue, next year. Sophie is also a poet and short story writer. Her website is http://www.sophiehannah.com.%27/

LEVINE is, unfortunately, out of print, so the public library or a used bookstore will be required. While Abe Levine stands apart from Westlake's better known characters, the careful plotting and mastery of craft present in all of his work is not lacking. Anyone looking for something different from a familiar hand could hardly do better than to hunt up a copy of LEVINE.

I saw a profile of Stark in the NY Times about ten years ago and bought Comeback. I have since tried to get my hands on all the Parker novels as well as anything else by Mr. Westlake. I'll definitely look for The Handle.

I'm currently reading one of Westlake's Dortmunder novels, DROWNED HOPES. I disremember when a series delighted me and made me laugh out loud as often as has Dortmunder and his crew. I thoroughly enjoy the Parker books and the stand-alones as well. Westlake is a national treasure.

LEVINE is a great short story collection. By chance I happened to read the issue of, um, AHMM? in which the last Levine story appeared. Even then, in high school, I could tell it was special.

He is amazing and I have to read more of him.

"The Handle" is maybe my second favorite of all the Parker novels. And the island has a cool name, too.
==============
Detectives Beyond Borders
"Because Murder Is More Fun Away From Home"
http://www.detectivesbeyondborders.blogspot.com/