WHEN A TV SHOW GAMBLES

Charles Gramlich has graciously interviewed me on his blog Razored Zen.


A year or two ago, BIG BANG THEORY took a gamble in introducing two new females to the largely male cast. The gamble paid off. The women enriched the show, humanizing the scientists, adding a little sexuality (okay, very little), but broadening its appeal. Girls' night out can challenge the men in its biting humor. 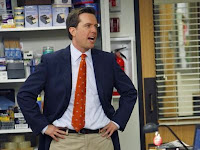 The show was not forced to do this in the way THE OFFICE has been asked to make changes due to the departure of Steve Carrell. It was a well-conceived choice.

THE OFFICE, on the other hand, perhaps fearful of introducing a new Michael Scott, elevated a minor play to his position. Unfortunately Ed Helms (Andy) is one of the show's most one-dimensional characters, and the series has hit the skids (IMHO).

Even the sporadic addition of James Spader as CEO has been too tepid to elicit much interest. Andy is the world's most boring boss and charater, and I assumed he would only be in that position for a few episodes but alas he's still there and I can barely bring myself to tune in.

Perhaps none of the supporting players have the moxie to steer this ship. But why not the addition of some brassy, man-hating woman, or OCD- sexual predator male to add some spice? Have the writers tired of the show? I can't think of an episode this year to rival any from previous years. Are they throwing up their hands?

What shows have been successful in replacing a lead character? Which ones have not? Has any show ever improved with a new face in a primary role?

What additions or changes destroyed the dynamics of a TV show?
Posted by pattinase (abbott) at 8:00 AM

MASH did a great job incorporating each new characters as the old ones left. Even replacing Radar with the inept Klinger was a stroke of genius.

MASH is the obvious one. I saw an interview with Mike Farrell where he admitted thinking "what if they hate me? What if I kill the show?"

Other shows have more or less successful assimilated new actors and characters over the years: NYPD BLUE, ER are two that come to mind, though I don't think the former could have survived had Dennis Franz ever left.

Of course, in the 60's BEWITCHED replaced Darrens, though I'm not sure how many people even noticed - and it could be argued whether or not he was a "major" character.

I don't think ALL IN THE FAMILY really survived all the people leaving, even though Carroll O'Connor stayed.

Doctor Who has done the whole changing-the-face thing very well, but it's a big adjustment as a viewer every time, I think. But that switch-up benefits the show.

Did Kirstie Alley fill Shelley Long's shoes on Cheers?
I don't watch CSI but I know they have replaced the original main character several times? Did that work?

When DRAGNET returned to TV in the 1960s, they replaced Ben Alexander (Jack Webb's 1950s partner) with Harry Morgan, who slid into the role very nicely. The show stayed on the air for several years.

Way back in the early 1950s, John Hart replaced Clayton Moore as the Lone Ranger due to Moore's contract dispute with the show's producers. Ratings nosedived, Hart lasted one season, and Moore was back the next year.

And when Monty Hall retired from LET'S MAKE A DEAL, the show kept on for a little while longer, but without Hall, it evaporated.

The original CSI has done a good job of not trying to have a carbon copy of the lead as each is replaced. Each new character is distinctly different.

Still the same old paint by numbers plots. It's grown wearying and I'm ready to bolt, as I did with the Law and Order shows. Let me amend that. Law and order U.K. is pretty good, what with the look at a different judicial system and the way of life of the English people.

That's the trouble with so many crime tv shows. The blueprint is written in granite and there are no surprises. But changing the country does introduce a new system as you say. Good idea to show those over here.
Colonel Potter was a good replacement on MASH for sure. I don't remember the earlier partner on DRAGNET.

I kind of like Andy but my good feelings toward him only go so far. I haven't seen a lot of real fun on the new version yet.

I like him as a minor character but they haven't given him a good bit yet. None of them are probably suited to take Carrell's place. Jim, too nice, Rainn Wilson, too nasty and all the rest too quirky. I think if they couldn't recast, they should have given them each a week in the big office. But this is just dull.

All I know is when Scrappy Doo came on the scene, the Scooby Doo show was dead to me.

Lost, when it's writers blew off the idea that they needed to resolve old mysteries before introducing new ones.

In BECKER, Terry Farrell (Reggie, the owner of the diner) was replaced midway by Nancy Travis (Chris Connor). The subtle chemistry between Becker (Ted Danson) and Reggie was the highlight of the show. Travis acted well but didn't fill Farrell's shoes.

Festus replacing Chester on GUNSMOKE. I likde them both, but preferred Chester. Kirstie Alley stunk; but I never liked her anyway. There were a couple of other partners before Ben Alexander on DRAGNET. How about the new Darrin on BEWITCHED? I liked Dick York better. There was a different Alice on THE HONEYMOONERS before Audrey Meadows, and Meadows was a massive improvement. The pilot for LEAVE IT TO BEAVER featured a different Ward Cleaver. Hugh Beaumont was eons better. As for THE OFFICE, I'll give it another look or two but if they don't improve it's adios, m.f. The characters seem to be wandering around in search of a script.

I second the DOCTOR WHO choice. When you build in change (11 different Doctors so far) that the audience accepts, you end up with the longest running science fiction TV program ever (43 years and 723 episodes--and counting).

I agree with you on Kirstie Alley. I disliked her long before I knew her (so-called) 'religious' affiliations.

In every case the replacement worked a lot better IMHO, though the father was barely in the pilot.

The pilot didn't stick with me at all but I am a great fan of the series. I could easily watch them again and again.

I'll recant BEWITCHED and mention LASSIE. I loved the Tommy Rettig shows, didn't care for the Jon Provost shows, and really didn't like whoever it was they brought in later, the non-kid incarnation.

Any fans of the British sci-fi series Primeval here? It lost me without Douglas Henshall and Lucy Brown. Henshall grounded the series, and Ms. Brown is a heartbreaker.

I've never seen it but I wish I had now.

LAW AND ORDER improved in its first decade, though even good casting couldn't help the tired scripts in the second (with occasional reprieves), as Jeff almost notes. LAW AND ORDER: CRIMINAL INTENT, improved considerably with the de-emphasis on the original cast.

NYPD BLUE improved slightly as they shifted the focus more toward Andy S. and away from the unlikely ex-kid star partners after running through the superannuated brats.

THE WIRE did fine shifting its character focus, albeit it, like HOMICIDE before it, did mostly keep the ensemble it had, simply augmented the original core group.

Possibly interesting that all of these are long-running crime drama.